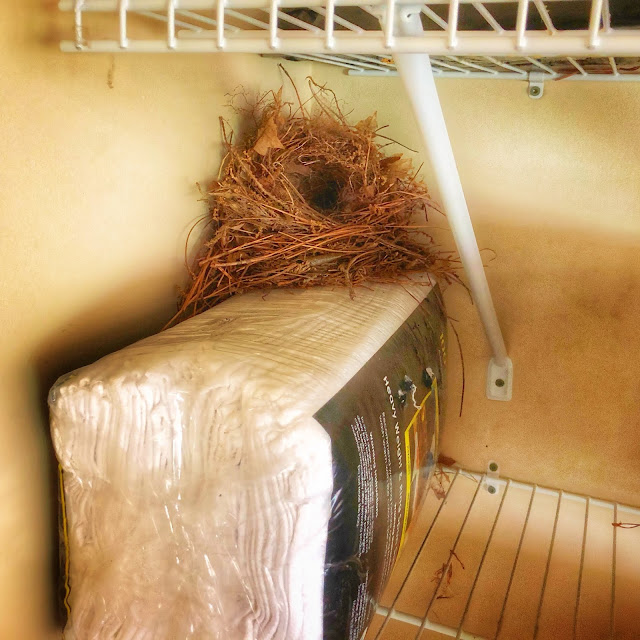 So we had this bird nest in our garage. Our nanny first noticed it a few weeks ago, high up on a shelf something like eight, nine feet up, propped on a shelf against a corner, atop of a pack of Costco bulk terry cloth towels. We've had a broken window in the garage for...I don't know, probably going on a year now (don't judge), and I suppose it was only natural that at some point, a bird might find its way indoors and make itself at home.

"What kind of bird?" a few people at work asked me when I brought it up, but I couldn't really say, since I never actually saw anyone in the nest. For all I knew, the nest could have been there for months, and I just never noticed it sitting there, high above my head.

However, the nest apparently did have an inhabitant, and around Mother's Day, she let us know. 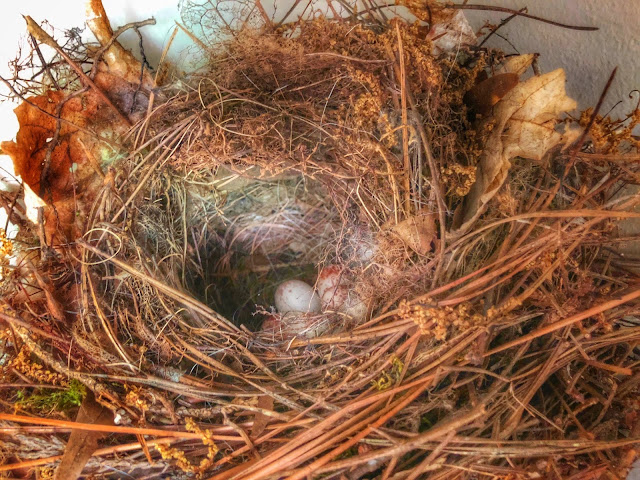 This also gave me a slightly more specific answer to the "What kind of bird?" question, because at least now I could say, "The kind of bird that lays eggs that look like that."

The consensus in the anesthesia lounge, both from the build of the nest and the speckling on the eggs, was that these were Carolina wrens. There were five little eggs tucked in there, the size of those Cadbury chocolate eggs with the candy shells sold around Easter (they're what M&Ms should ideally be, in my opinion--better chocolate, thicker shell), and while it certainly made me somewhat monstrous for thinking of this mother bird's clutch of eggs in terms of snack food, I'm sure in the wild, outside of the safety of the high shelf in our garage, the eggs would be a snack for someone.

I had no idea what the gestational age of a baby bird is, particularly when the species is unknown. So I checked on this clutch of eggs a few times, but not daily, as I didn't want to spook the mom (again, I'd never seen her in the nest, for all I knew she'd already abandoned the eggs that the creepy Chinese lady kept peeking at), and anyway, it's not like anything interesting was happening.

Then, one weekend about a week and a half ago while I was in New York, I got a picture text from Joe. 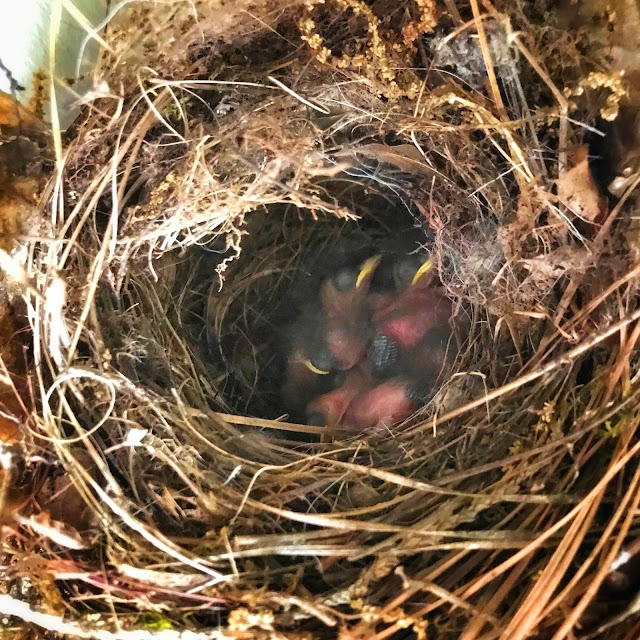 "I'm not sure if they're dead," his text read, "they're not moving. Maybe the garage was too hot for them?"

Since I was not there, I couldn't really weigh in, and I certainly couldn't tell from the photo. What could we have done, anyway? Put a little mirror under their beaks to see if it fogged up? Put on teeny tiny EKG leads? Put them on ECMO?

"Don't touch them," is all I could think of to reply, "and don't show the kids, it'll make them sad." It was a still photo, but Joe assured me that a video would look no different. And hell, babies that you can't see moving or breathing at all? Sounded pretty dead to me.

When I got home at the end of the weekend, the first thing I did (well, in truth it was maybe the third thing, after putting down my luggage and going to the bathroom) was stand on a chair, put my camera on a selfie stick telescoped out as long as it would go, and take a picture of the nest. 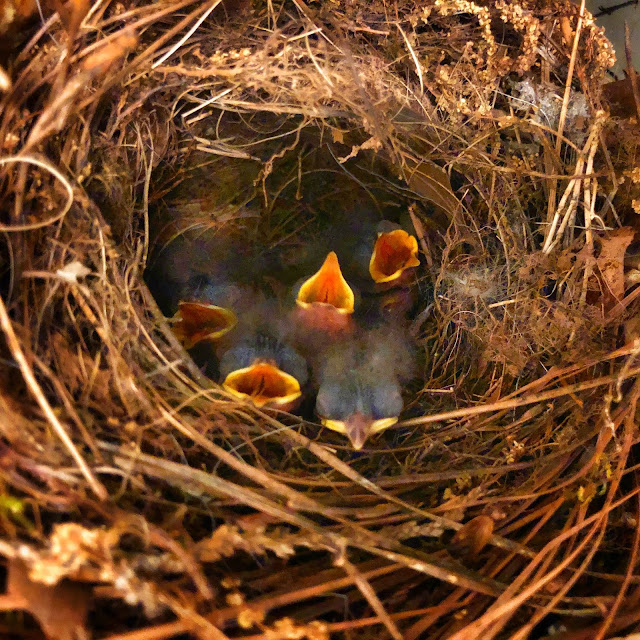 They were not dead.

I exhaled a long breath I didn't realize I'd been holding in up until that moment.

When I took the MCATs back in--good lord, I think it was the summer of 1997--I remember this one section in the "critical analysis and reasoning" section. This is the part of the test where they give you some deathly dense and deliberately boring excerpt of technical writing and ask you a lot of questions about it afterwards to ascertain that you were able to not only stay awake, but actually retain and synthesize the information. (While this might be a reasonable test for how you would fare in med school, I will venture to say that it has only marginal bearing determining how good of a doctor you might eventually become.) Anyway, most of the sections were, as I said, deliberately inscrutable--an excerpt from a technical manual about how to extract aluminum via electrolysis, for example--but some reading selections were sort of interesting, probably by accident.

This one I recall was about the breeding habits of certain birds in which "obligate sibicide" was the norm. Meaning: the bird will lay two or more eggs, and as a necessary evolutionary flourish, survival of the fittest, the stronger siblings will kill one or more of the weaker ones. Always. As a rule. I obviously didn't retain too much of what else I had read (though, to be fair, it was more than 20 years ago), but I figured, hey, five eggs is a lot of eggs. Probably by design. It was probably normal to lose a few by attrition. It's likely what we should expect, in fact.

I checked the nest every day (at this point Joe had set up our tallest ladder by the shelving and just left it there because apparently I was becoming the goddamn Birdman of Alcatraz and the ladder was heavy) but I would always approach with this vague, atavistic dread that at some point I'd happen onto one or two or five dead baby birds. 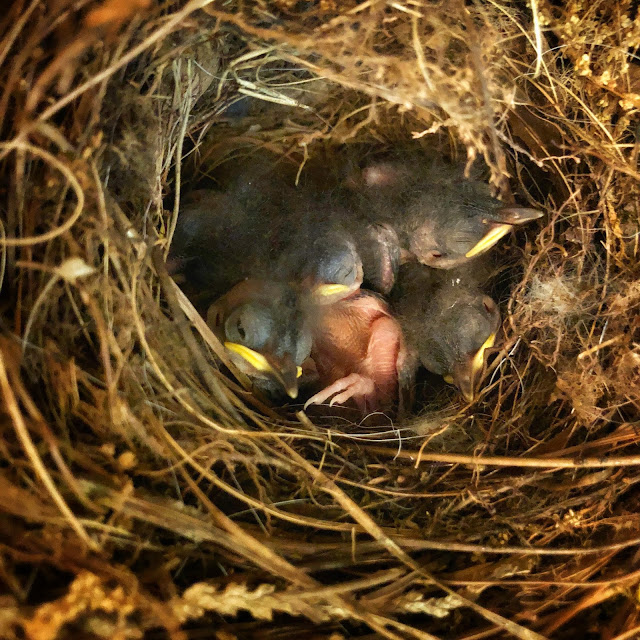 But there were no dead baby birds. Every time I peeked at them (just peeked, never touched), I did a quick head count. I couldn't tell them apart, I didn't name them or anything, I wasn't crazy--but just a quick head count. One, two, three, four, five. Every day, all five were there. 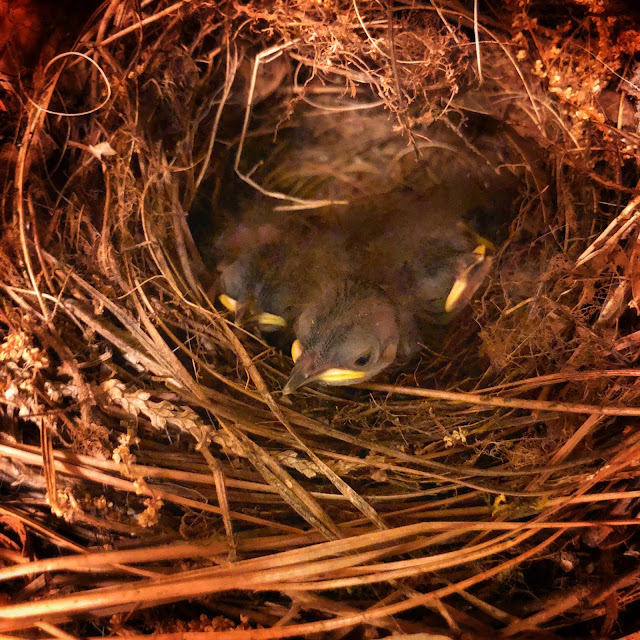 Sometimes they would be in a different order, sometimes a few of them would be hiding in the back, but always, every day, five of them. They grew. 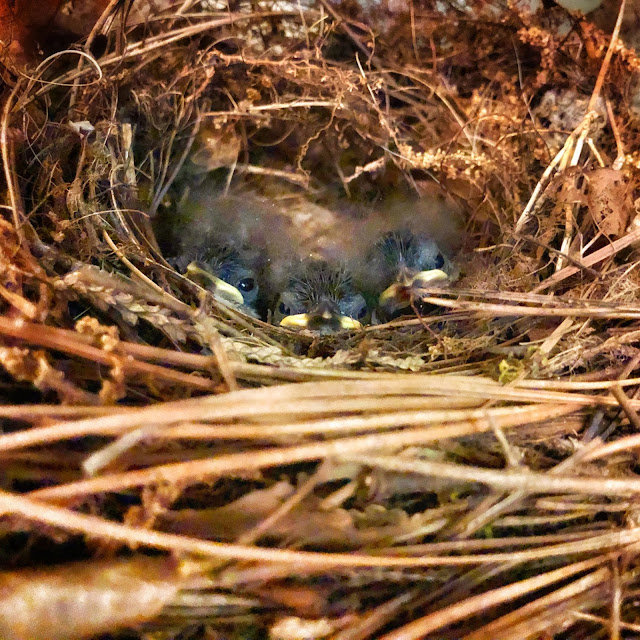 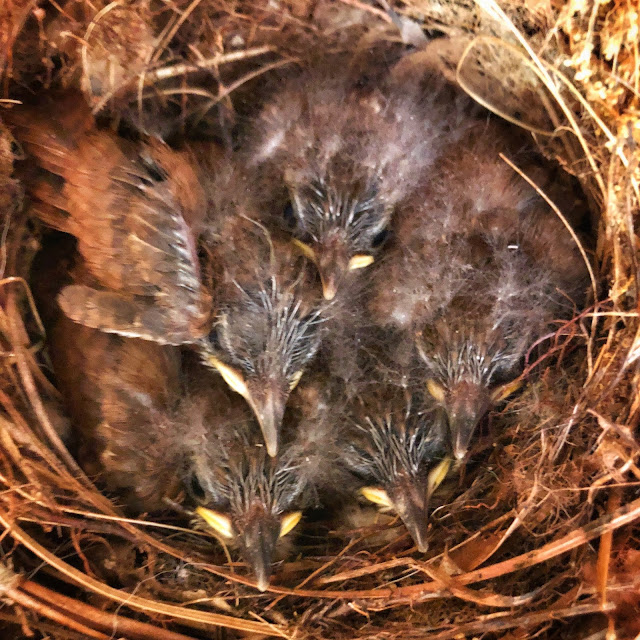 And grew, until their ceiling hung with vines, and the walls become the world all around. 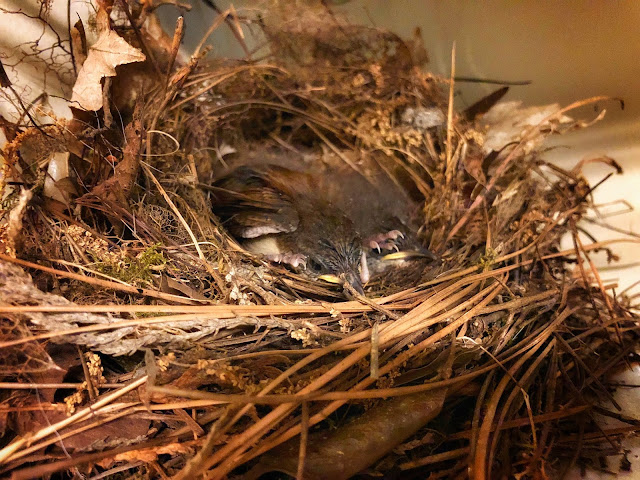 Yesterday, when I went to peek at the birds, it started to look a bit crowded. There was that adolescent gangliness to the brood--they still all seemed content to stay inside, they had a few tufts of baby down showing through, but the nest suddenly seemed like all arms and legs. 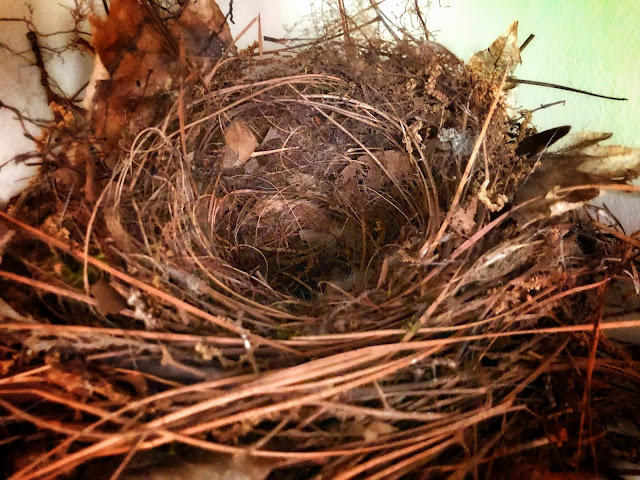 Joe caught a glimpse of one of the no-longer-babies early this morning, hopping around on a cardboard box by the recycling bin, virtually indistinguishable from the adult birds we'd seen about, but for the few sprigs of downy fuzz it had yet to shed. But by the time I got home from work, none of them were left. The garage was suddenly very quiet.

I'm not totally sure why I'm telling this non-story. After all, it's not really that interesting--lots of people find birds nests near their houses, baby animals come and go all spring and summer, the "empty nest" analogy as applied to human children is trite and hoary, and something I honestly don't really know about yet. (Soon, yes. But not yet.)

I think it was my reaction to the birds. The way I automatically assumed the worst. I think this happens at work a lot--in fact, I think the reason I sometimes assume the worst is because of the work I do. It's like a protective mechanism. You learn the statistics, you recognize patterns, you make predictions, you prepare yourself. Hope for the best, sure; but always, always, always prepare for the worst. Prepare yourself for the bad outcome and you'll never be surprised or disappointed. It's the bad outcomes you allow to blindside you that will truly break your heart.

When I was a resident doing a rotation in the cardiothoracic ICU, there was a saying we'd murmur to each other back and forth on rounds, under our breath. Well, it was maybe not even so much a saying so much as it was a known phenomenon. "You fly or you die." Patients who had major cardiac surgery seemed to have two paths. Either they would do great--they would fly--or they would limp out of their moment of crisis, hobble through the next few days and weeks, accruing one complication after another, and eventually, succumb. It wasn't absolute, but it held true enough that it was accepted as near uniform fact. You fly or you die.

Life is not nearly as uniform or algorithmic as we would sometimes like it to be, of course. The comfort of a logically predicated outcome and the inurement against heartbreak can sometimes close you off to the possibility of an improbable result. Worse yet, sometimes one becomes so jaded against good things happening that the possibility of a good result seems less likely than it should.

I'm not saying that having five baby birds born in our garage and having all of them survive to leave the nest is an improbable result. From most of my limited conversations with other people who've had firsthand experience in such matters (so...two conversations, then) this in fact seems par for the course.

But maybe that's not the point either. Maybe the point is just that surprise and delight can sometimes go hand in hand. And that delight can be found in the most improbable places, exactly when you least expect it. 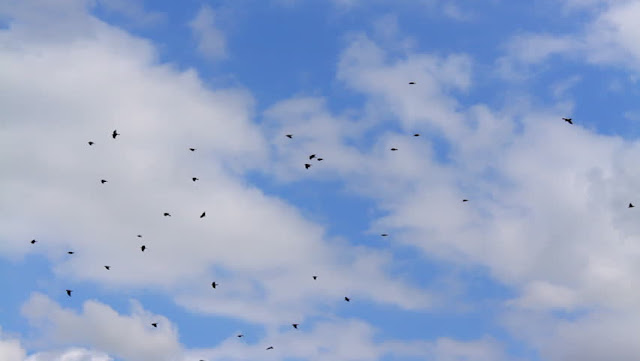 Email ThisBlogThis!Share to TwitterShare to FacebookShare to Pinterest
Labels: advice from the trenches, anesthesia, medicine