About two years ago, one of my fellow Peds residents (who had recently returned from maternity leave) described to me the feeling of returning home to her baby after a long day a work. "You know how it is, after you take an exam that you know you did really well on, and you're going to class that day knowing that you're going that exam back? And you just have that kind of happy anticipation? That's how I feel every day before I go home." At the time I didn't really understand what she was talking about (well, half of what she was talking about--I understood the exam part of it just fine, because I am a nerd) but now I can see that she was exactly right. That good-grade feeling is what it feels like to come home to Cal at the end of the day. Actually, it's better, because there's no kicking yourself for choosing B instead of C, and losing those two extra points that brought you down to a 98 from 100. Coming home to the baby is like getting 100 every time. 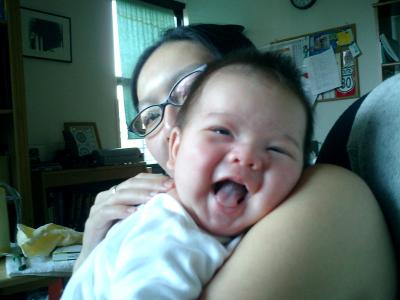 I wouldn't say that my first "real" week as an anesthesia resident went flawlessly, but I do think it went OK. At least I'm not sitting up in bed half the night now, fretting about not knowing how the fluid pump works. And it's nice being on my own more, so I can start to develop my own little habits and quirks. One thing I've found is that most anesthesiologists kind of have OCD. They have their own little system, and they like things done their way.

MICHELLE
I set up my meds.

OTHER ANESTHESIA PERSON
(Looking over med setup)
Oh, good. Only I like to have my meds set up like this.
(Takes propofol syringe and moves it 0.1 cm to the right)

I think you have to have a little bit of OCD to go into Anesthesia. Either that, or the field beats it into you. Which is fine with me.

So some of you have been asking about the details of Joe's week as Mr. Dr. Mom. I have to say, they had a great time, and probably accomplished more and did more enriching activities than I was able to accomplish when I was home with Cal. Part of it is that Cal is older and smarter now, so he can actually do more in the way of play (my version of "playing" with the baby when he was only two or three weeks old mainly consisted of carrying on long, train-of-thought monologues, in response to which Cal would either look bored or suspicious) but another part of it is that Joe is a lot braver and stronger than I am. For example, he took the baby to visit my parents via suway, something I have yet to do alone because I am puny and get nervous about carrying that big stroller down all those stairs. And he was able to take the kid to the park almost every day, sometimes with the dog in tow, another something I haven't even considered doing, because The Coop, she is not so good on the leash, so it takes a lot of strength to walk her even without the stroller and diaper bag.

Plus, there are hygiene issues--the dog poops, you pick it up with the little baggie, but aren't you now contaminated for touching the baby? I mean yeah, we have Purell on board, but something about picking up DOG POOP WITH MY HANDS (despite the protective baggie layer) makes me long for a good old-fashioned hand wash with soap and water. I mean, we've packed the kitchen sink in the diaper bag, but that doesn't actually mean that we have, you know, the kitchen sink.

And this brings up an interesting (?) question that I've had for years now--how come, after you pick up dog poop, your hands smell like dog poop? The smell should come from little molecules of dog poop that adhered to your hands, but theoretically, the baggie should provide enough of a barrier for that 5 seconds of hand-poo contact that should prevent the smell molecules (smellecules) from rubbing off. We're picking the poo up with water impermeable plastic, after all, not cheesecloth. So why the smell on the hands? How did the smellecules get through? These are the questions that haunt the mind at 3am, and this is why I don't like walking the dog and the baby at the same time.

But anyway, Joe is brave. He took the baby to the post office, to the store. He played with the baby on his playmat, on the bouncy chair, in his arms, and even videotaped it for posterity. He fed the baby, washed the baby, napped with the baby. They had a blast. I would totally hire him as our nanny, except I hear that he has some other job that he needs to get back to next week. Dammit.

Currently reading: "Tender at the Bone," another Ruth Reichl food-memoir. I liked "Garlic and Sapphires" so much I figured I'd give this one a try too.

Currently considering: Purchasing a scrub jacket for the OR, because it's freezing in there, and the environmentalist/economist in me is thinking it doesn't make much sense to break open one of those sterile surgical gowns every day just as a cover-up, only to throw it away later. I heard those gowns cost something like $40 each. Or maybe that's the drapes. I don't know, either way, it's expensive. The thing that's holding me back from actually buying a jacket is this nagging thought: What if patients think I'm a nurse? And then the next nagging thought: So what if people think you're a nurse? There's nothing wrong with being a nurse!

MICHELLE
But I'm not a nurse! It's just about truth in advertising!

MICHELLE
Is it that, or is it that you're worried that people won't know that you're a BIG IMPORTANT DOCTOR?

MICHELLE
But I'm not big or important. I'm just not a nurse.

MICHELLE
You're bigoted against nurses.

MICHELLE
Nuh-uh! No way! I just wouldn't necessarily get a scrub jacket that has a bunch of hearts or something printed all over it.

MICHELLE
Look, are you cold in the ORs or not?

MICHELLE
So do you need a jacket or not?

MICHELLE
Can't I just wear one of my own sweaters from home?

MICHELLE
You want to wear your cable-knit wool sweater into the OR?

MICHELLE
Why do I need to wear special clothes anyway? I'm not sterile! I'm not doing the surgery! Why can't I just wear my hoodie?

What do you all think about this jacket? It's cozy, and has big pockets. And it has no pictures of teddy bears on it.
Posted by Michelle Au at 10:39 AM