make your own scrub cap (or: how to be the classiest dork on the block)

OK, so the first thing you have to do is pick a fabric. I don't know if it's at every hospital of just mine, but you have to be unique about this. Wear the same scrub cap as someone else (unless it's the disposable kind) is as much a faux pas as two girls wearing the same dress to the prom. I picked this fabric displayed below, which is kind of retro and mod, because I am so old school. (Read: old.) There are tons and tons of places to find novelty fabric (you can look here or here to start), but I got the fabric shown below at this place. 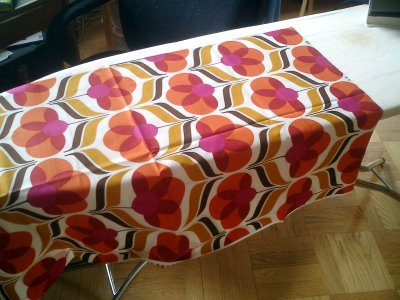 Since it's eventually going to end up on your head, I would recommend getting a cotton fabric--be careful if you're buying online to look that you're not actually getting some heavy canvas for upholstering furniture. Also, I bought a yard of fabric because I didn't know what the hell I was doing, but you only need about half a yard for the hat. Or, get a yard and make two hats. Or two yards and make four hats! Math, folks. MATH. 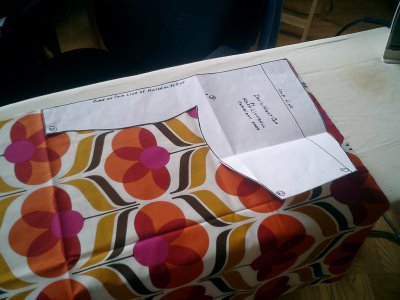 The next thing you have to do is find a pattern. Maybe if you are some Home Ec spatial-relations whiz, you can figure out how to make a 3D hat out of a piece of 2D cloth, but I'm not that smart. I got my pattern here (it's called the "Day 'n' Night" hat), and like I mentioned before, it's actually designed as a hat for chemo patients. But that's OK! It can be a hat for chemo patients and those of us that take care of chemo patients! And if you make some extras, you can give them out! Unless you choose a really ugly fabric that your patients hate. Then just keep them for yourself. 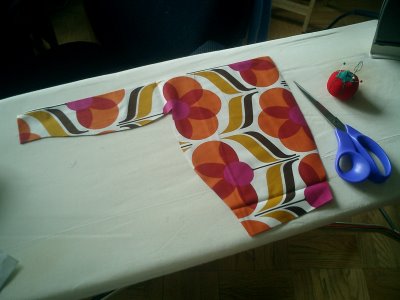 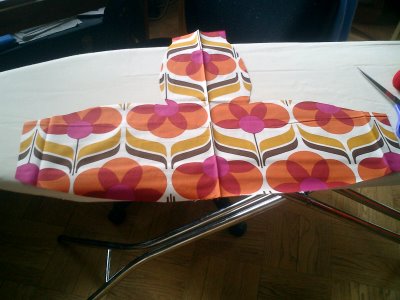 OK, so you have the pattern and you cut out the cloth in the shape dictated by the little piece of paper. (It's actually bilaterally symmetrical, so you cut it out folded and then unfold it like a butterfly.) The first thing thing I thought when I saw the pattern cut out was, "The hell? This doesn't look like a hat!" Patience, grasshopper. There is still work to do. 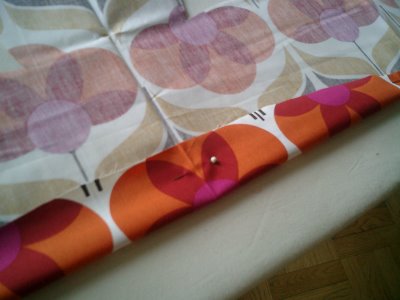 Lay your fabric so it looks like an upside-down letter T. Then fold the bottom edge up and pin it in place. This is going to be the brim of the hat. How much you fold the edge under depends on what kind of a fit you want for your hat. For a close-fitting hat (like the one Joe has on in this picture) fold more of the fabric under, so there's less loose fabric in the end. For a looser hat (which you can cram your ponytail or 'fro in, or what have you) fold less of the fabric under. So anyway, you fold it and pin it and then you iron it down. 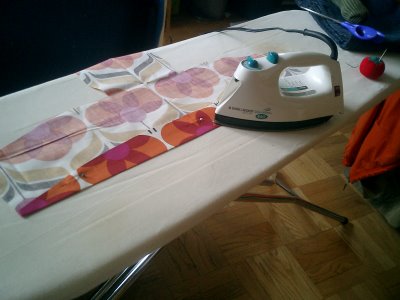 "What, first you get a sewing machine, and now you're talking to me about ironing? I thought you went to Wellesley!" Yeah, but listen--the iron is just to make the edge all smushed down and flat and crisp. See how I took this picture as though the iron is doing the work all by itself, like Roomba? Oh, only in my dreams. Anyway, after you iron down the edge, then you start the actual sewing part. 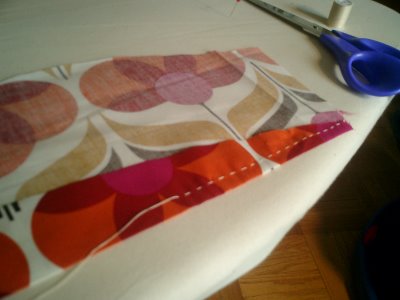 I don't know what kind of stitch this is called, it's just the kind where you go up and down through the two pieces of cloth in a straight line. Just make sure you choose a matching, or, barring the ability to completely match, a coordinating color of thread, since this will show through the front, along the edge of the brim. When you get to the end of the piece of cloth, tie off the thread and cut it off. 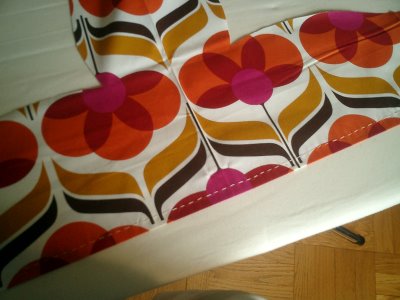 Who needs a sewing machine when you can hand stitch with such precision? (Humor me, here.) Next up is the part of the sewing where we make everything 3D. 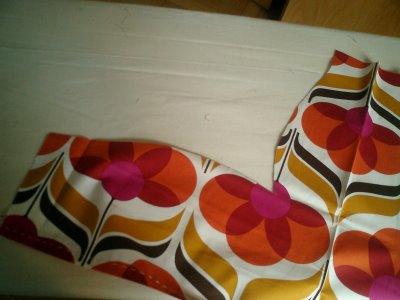 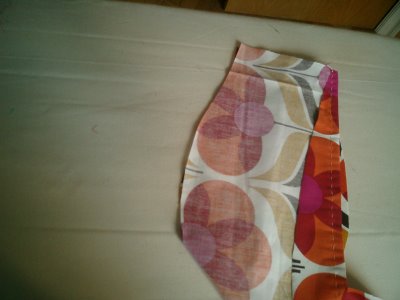 Find the curvy part of the pattern and fold the two edges together so that the back side of the fabric is showing. Then sew this together along the edge (the edge on the left side as shown in the picture above) to make one of the seams along the top of the hat. It looks weird, but when it's done, you kind of turn it inside out and it's all good, really. 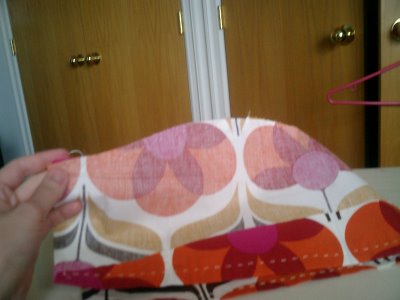 When you finish one side, fold over the other side and repeat. Basically, if you can't picture what we're doing, you've just sewn both bars of the T-shape to the stem. 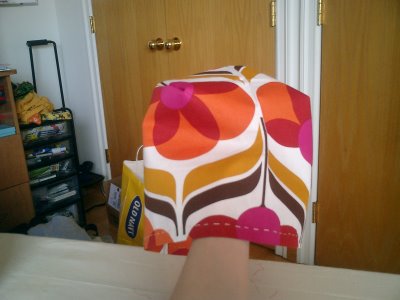 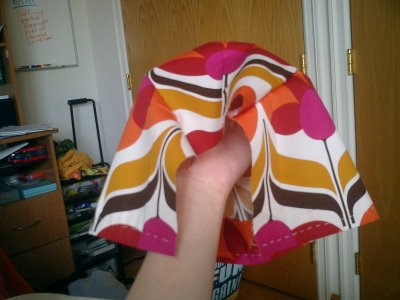 Flip the hat right side out--now see how the front of the hat is done. However, the back is still all open and flapping in the breeze. We need to make the drawstring closure next. 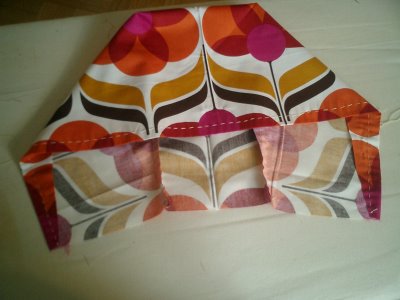 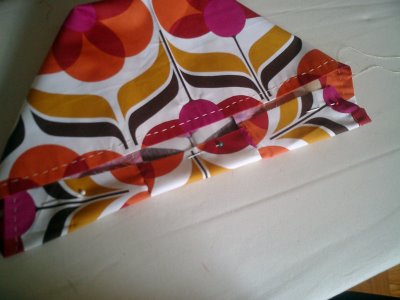 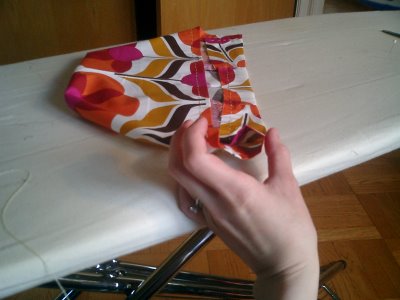 Lay the hat flat and fold up the edge of the back about an inch and a half. Do the whole pinning and ironing bit again. Then stich the back to itself about an inch from the edge. This will make a little tunnel of cloth through which you can funnel the drawstring. 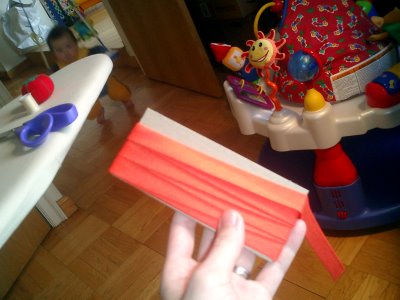 I use this for the drawstring. It's something called "bias tape." I have no idea why it's biased or what it's really for, but it's basically just a flat piece of cloth that comes in a lot of different colors, and it's easy to find. Of course, you can also make a matching cord out of the fabric itself, like I did for Joe's hat, but that takes more time and effort, and I'm lazy. 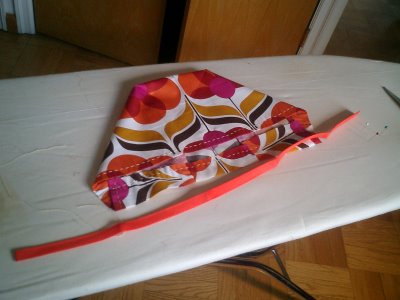 But how to push the drawstring through? Here's the part where I use THE MYSTICISM OF THE ORIENT: I tape the end of the bias tape to a chopstick, and I push the chopstick through the tube of cloth, scrunching it as I go. Then I untape the string from the chopstick, and voila, she is through. If you don't have chopsticks, I suppose you could use a pencil or a knitting needle or something similarly skinny and long. (No off-color jokes, please.) 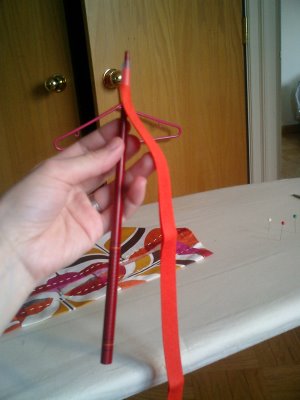 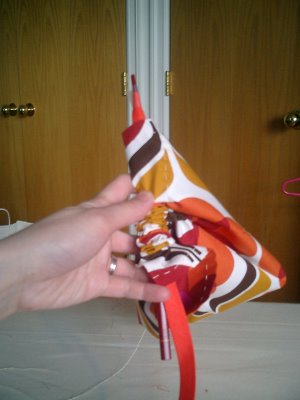 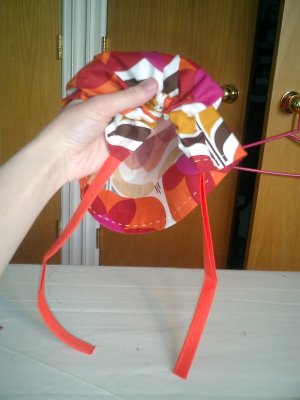 And you're done! Put on your hat, cinch it to fit, and walk around insouciently with your stylish headgear, you! 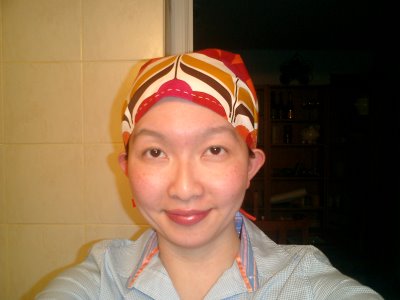 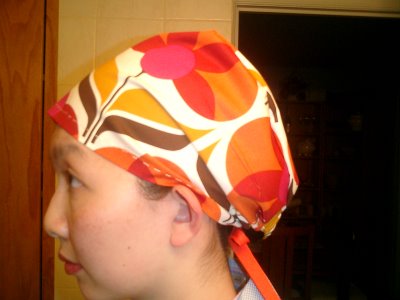 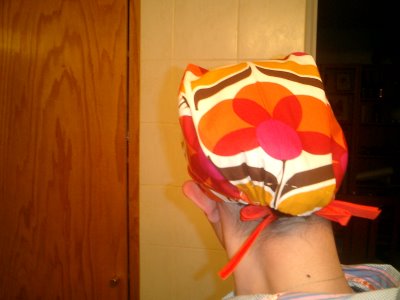 Oh lord, what's happening to me? If I start threatening to grow and dye my own cotton, just shoot me.

Currently watching: "Harry Potter and the Goblet of Fire." My sister brought over the DVD yesterday. It was OK, and Ralph Fiennes was creepy as Voldemort, but my sister pointed out to me early on in the movie how much Hermione overacts with her eyebrows, and it started to get really distracting.
Posted by Michelle Au at 8:05 PM