First, a couple of new pictures of Cal, because it's been a while: 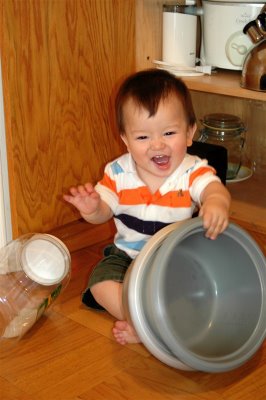 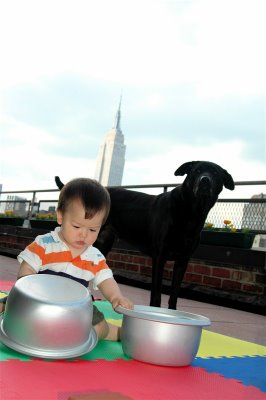 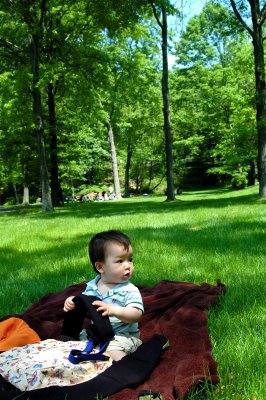 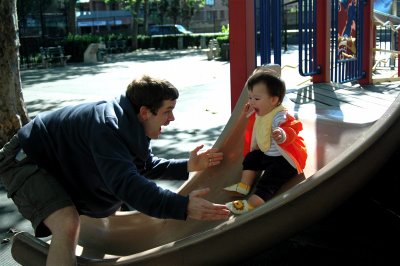 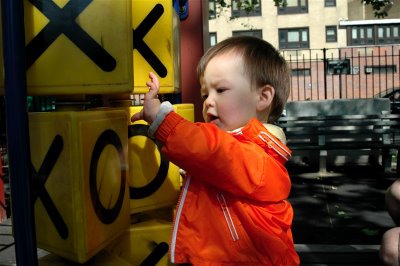 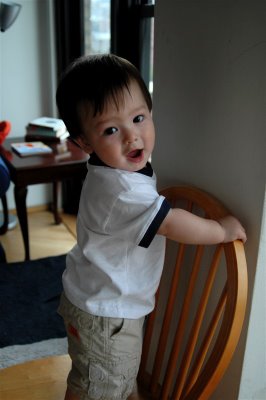 The kid is going to be a year old next month. Man. How did that happen?

I know, it's been a while, but I must respectfully report that the SICU has been kicking my ass. It's not the most difficult rotation, but it's just a little hard to manage time-wise. One of the main problems is that when we're on call, we work a 24 hour shift from 1pm to 1pm the next day, which means that you don't really get a full rest on your post-call day, and for those of us who aren't able to really sleep in the morning of (read: human alarm clock pulling your hair and demading breakfast), there's not really much rest pre-call either. Put this all together with a few busy calls in a row and this equals NO SLEEP, EVER. But hey, it's just one more week, right? Then I'm off to my OB rotation, where I will also get no sleep because of the screaming pregnant ladies, but at least will be able to go home the morning post-call.

The thing about working in an adult ICU is that people die. Like, a lot. And then it is sad. And also you have to sign a lot of papers afterward attesting to the deadness. I would have thought before this that it would be relatively easy to tell when a patient was dead, but let me tell you--not so much all the time.

Like a few nights ago when I was on call, the nurse came over to tell me that one of my patients had just expired. (That's the terminology they use in the unit, not "passed away," or "died," but "expired," like a carton of milk left on the shelf for too many days.) It was a totally expected outcome that we had in fact been waiting for--the patient was DNR and had all pressors and aggressive resucitation withdrawn--so I wasn't surprised to hear that she had gone asystolic. The family was there, and I wanted to give them some time alone, so I went about the bureaucratic business of declaring someone dead--calling the medical examiner, calling the admitting office to get the death certificate printed up, that kind of thing.

About five minutes later, I went into the patient's room to talk to the family. They were there, they were crying, and there were a lot of them in the room. The patient was lying on her bed, being dead. And then suddenly she opened her mouth and made sort of a gasping movement. The nurse looked at me. "Agonal breathing," I said, and motioned for her to take the patient off the vent to avoid freaking the family out. She did, and we waited for the movements to stop. And waited. She had been asystolic now for about ten minutes, and the nurse had since turned the monitors off. "I know she's dead," I said, feeling less and less sure of myself, "but...could we just flip the monitors back on for a second? I just want to see." The monitors came back on, and we saw the EKG tracing at flatline. Flatline flatline flatline. And then, one little blip. Many seconds passed. Then another blip. And then--I really couldn't believe what I was seeing--more and more beats until she had an irregular heartrate of about 50. "It's probably just PEA," I said, ostensibly to the nurse but mostly to myself, "nothing we're going to do anything about," since the patient's family explicity wanted no resucitation, no cardioactive drugs. But to confirm, I went to feel for a pulse.

There was a pulse.

"Holy shit," I said, "she's back." By this time the family were all loitering in the hallway and sitting in the conference room down the hall, so I didn't have to act all cool and profesional in front of them when I was actually losing my shit. "Have you ever seen someone be asystolic for, like, ten minutes, and then get a pulse back? What the hell is this?"

"Sometimes it happens," said the nurse, all blase blah, probably because she had seen probably hundreds more people die than I. "What do you want to do?"

"She has a pulse, we have to put her back on the vent, right? I mean, her heart will stop again later on and we can turn it off again then, but if she has a pulse, I think we're kind of obligated to, right? Right?" I was completely out of my comfort zone, in the resident's worst case scenario of It's Life and Death and I Don't Know What The Fuck I'm Doing. I mean, what do you do when you declare a patient Dead and then, ten minutes later, they decide to become Not Dead?

So we put the patient back on the vent, I called my fellow (the first thing he said was "Why did you turn the monitors back on?" to which I answered, "She fucking had a pulse, dude!") I called the admitting office to tell them to hold off on that death certificate for now, and then I went to talk to the family. That was the hardest part, going to talk to the family. I do think they understood that the patient was, for all intents and purposes, dead, as people with no blood flow to the brain for ten minutes will be, but I think they were confused by the whole thing with the heartbeat and all. Join the club, people.

Anyway, the patient "expired" again a few hours later. "Let's wait another few minutes, just to be sure," I said, gun shy and leery of the whole thing. But this time the heart stayed silent. After about fifteen minutes, we turned off the monitors and took her off the vent.

I'm still trying to figure out what I learned from this experience. I would like to say that it's something profound about life and death and medical futility and ethics, but maybe it's more something like, "If someone's dead, don't turn the monitors back on."

Currently Reading: Ooh, I read a lot of books in the past few weeks! Thank you, New York City subway system, for making this all possible. Of course, all this leisure reading this means that I haven't done a lot of reading for work and therefore look like a moron when pimped on rounds. What? The New England Journal of what? Anyway, first I read "The Grizzly Maze," which was fairly interesting and makes me want to watch the documentary, though it's unlikely I will as I can't watch movies on the subway. Then I read "Prep," which I couldn't put down, and reminds me all too vividly of my own excruciatingly introspective adolescence. And now I'm reading "First They Killed My Father," which is about a family in Cambodia during the rise of the Khmer Rouge. So basically, a little bit of everything. (It was one of those 3-books-for-the-price-of-2 deals at Borders last month.)
Posted by Michelle Au at 11:50 AM