We moved into this house about a year ago, which of course means we haven't really done anything major with the house until maybe the past two or three months.  Oh sure, we did a few things (painted exactly two walls, hung some pictures) but overall we just sort of putzed around as we do, because not being overly fussy we were happy just as long as thing were functional, if not optimized.

I did make one offhand remark last weekend though, which was: "I really wish we had a swingset for the kids to play on outside."

I do.  We have a nice, medium-sized backyard--it was, indeed, one of the things that drew us to the house in the first place (it didn't otherwise show particularly well, it was only because we looked past some of the more glaring, uh, design flourishes that we fell in love with the house in the first place) but it's not really a yard for kids.  It's a gardener's yard.  A gentleman's yard.  A puttering around looking at plants yard.  Not a run around and play ball yard. 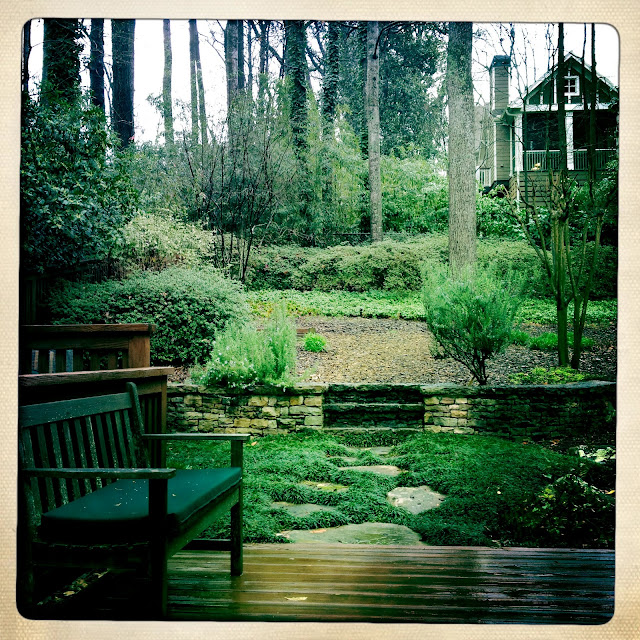 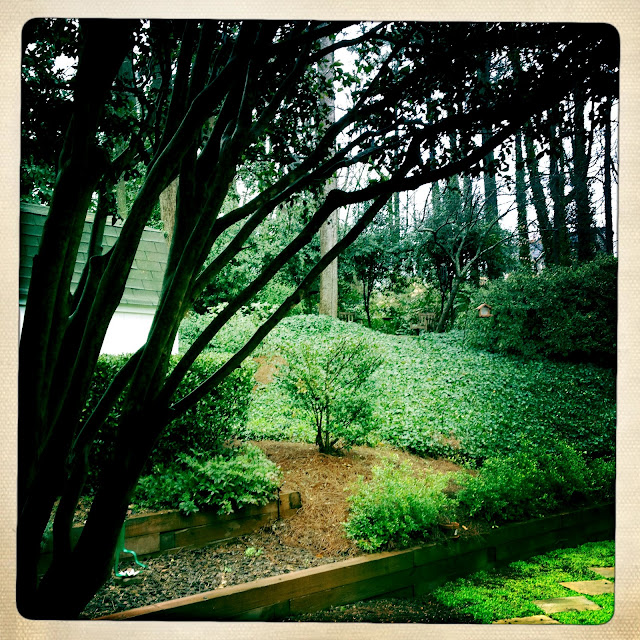 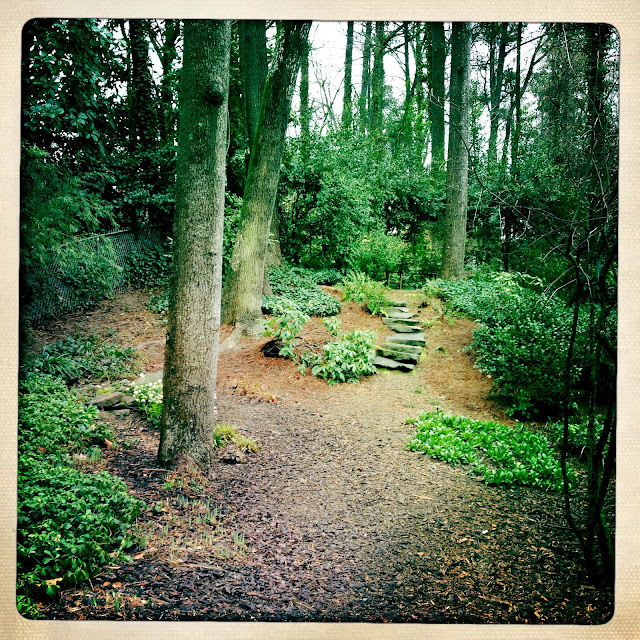 It's very pretty, don't get me wrong. Whoever originally engineered this backyard was also very smart in how they planted things (again, it's more of a gardener's yard) in that they staged things very nicely--there's always something blooming or looking pretty somewhere. But most of the yard is unusable for traffic. It's kind of tiered yet sloped at the same time. There's the deck (medium-sized, mainly kind of an entryway to the house--we also have a table out there for eating when it's nice out). Then there's a few stone steps to a kind of small middle staging area, only a small portion of which can be walked on (most of the rest of the hill--I mean, like, 90% of it--is taken up by shrubbery and ivy and pine straw), and then a path up a few more stone steps up to a tiny little third area, which in total is about the size of a medium-to-large-sized Chinese banquet hall table. (Round, I mean.) It's a gorgeous yard, don't get me wrong, and we do love it--it's just not quite for kids. Believe me, I've tried.


KIDS
(Killing each other)

MICHELLE
You kids! Stop killing each other! Go outside!

KIDS
There's nothing to do outside!

MICHELLE
Yes there is! Go play! You're kids! Go do kid things!

KIDS
But it's boring.

MICHELLE
Where's your childish sense of wonder? Go find a worm or whatever.

KIDS
Can we go to the playground?

KIDS
(Continue killing each other indoors, where I can unfortunately still hear them.)


I guess Joe had been thinking the same things as well, because upon my single half-baked musing (and granted I was not totally serious, because I figured we just didn't have the right kind of yard for a swing set) he marched right outside and started prospecting the site. 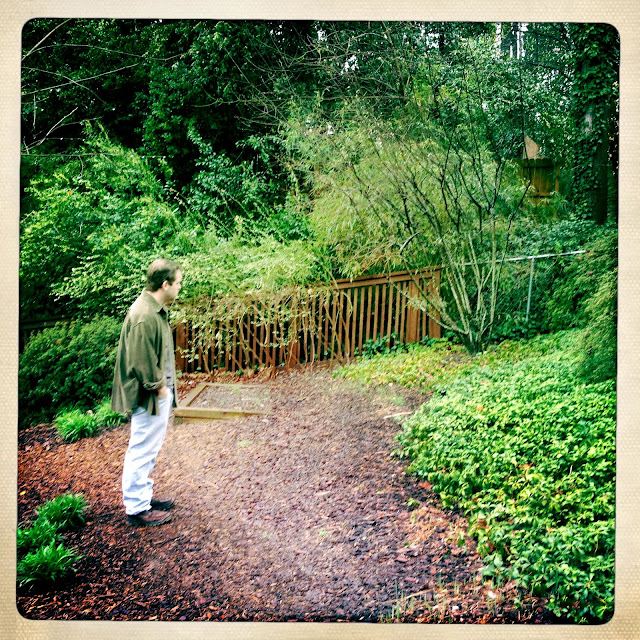 There's this one kind of sloping area--not flat, but as close to flat as you can get in our yard--that seemed amenable. Joe used to do some landscaping in high school, so he started talking about leveling this, putting a retaining wall in that, blah blah blah, and it became evident that, yes, perhaps we could put in a small swingset into the one little plot of dirt that used to be a path and a spice box, and is now a pile of muddy mulch and a weed box. He wasn't sure exactly the scale of the job or how much it would cost, so we had a contractor come by this weekend to weigh in and give us some ideas.

Well, the contracter came, and he and Joe were talking and talking and talking outside, like, a lot.  There was a lot of gesturing in the yard--gesturing in areas where no swingset could ever live.  Eventually I got curious and popped my head out there to realize that the plans had morphed from "level this one little area of the yard" into "level out a full half of the yard, incorporating a swingset area, a flat grassy play area, and building in a stone wall around a fire pit."  Also he suggested that we move the damn shed. 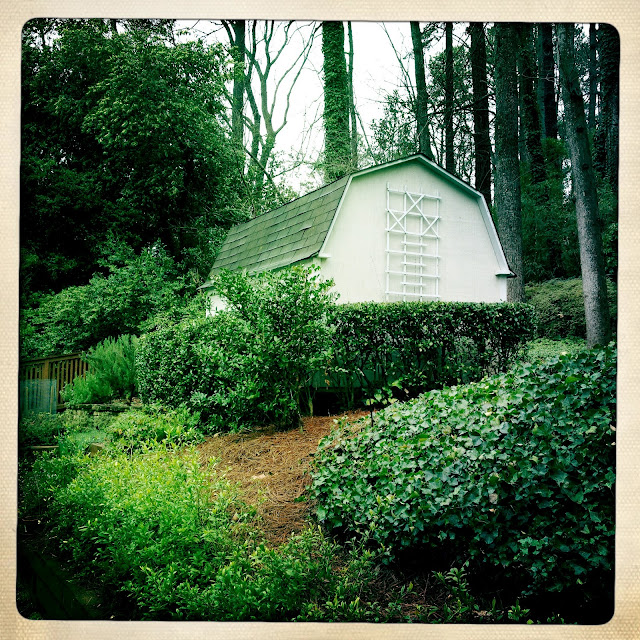 I have to admit the contracter had a good point when he noted that this shed (and it's not bad looking as sheds go, but still--it is just the place where we keep the bikes and poisonous/stabby things) is inexplicably the focal point of our backyard.  I mean, literally, it sits right in the middle of the yard.  He said: I can move the shed to the back near the fence, get it out of the way.  We'll save all the plants, transplant them, move them around.  Let's level out all this shit.  Give your kids space to actually run around.  And then we can put in your stupid swing set.

I was hesitant at first, because it sounds like kind of a big project (translation: expensive), and we're having a baby this summer, shouldn't we save all our money to buy, I don't know, diaper wipes and nasal aspirators or what have you?  But then the other argument is: we're having a baby this summer, and we have two other kids.  We have a yard that we never use.  We even have a mosquito system in the yard to make it more usable (oh, the mosquitos in Atlanta are the size of small birds, I tell you) but again, why did we put in a bug system into our yard if we're never outside to enjoy it?  I mean, I enjoy our yard--it looks pretty through a window and it's nice to eat out there and have a beer and watch our kids fall down the hill (kids! gravity! two great tastes that go great together), but as uses of space goes, it's not the best for our purposes.

So I think we're probably going to go ahead and do it.  What the hell, right?  We've been here a year, let's make this house look how we want it to look.  Part of me feels a little guilty, because like I said, it is a very pretty garden, and it makes me feel like I'm killing nature or something.  But then I remembered that this yard has already been pretty aggressively landscaped (just not quite to our functionality requirements) and that almost everything growing there is artificially transplanted in anyway.  Besides, the landscapers say that they're not going to get rid of any of the plants, they'll just replant them in other parts of the yard so we can still enjoy them/continue killing them with benign neglect.  So--hooray!  Nature and Man both win!

(Now to start worrying about ways that my kids will crack their melons open by falling off the top of a swingset.)


Thank you all SO MUCH for all the name suggestions on the last entry, by the way!  (It was, by the way, I think the most comments that I've ever gotten on a single entry.)  I think I also mentioned in the comments (though I realize not everyone reads them so I'll repeat here) that our original name choices for the baby we thought was going to be a boy were either "Ben" or "Beau," leaning towards "Beau"--but we can't use those now, can we?  I know Rebecca Woolf calls one of her twin girls "Bo," but that's short for "Boheme," and though that's such a gorgeous and fitting name for her little girl I really don't think Joe and I are bohemian (ho ho) enough to pull that off.  But you've given us a lot of great choices, many of which we love--and I'm not saying that in a placating Cal way.  Again, thank you!  Best readers on the internet.
Posted by Michelle Au at 5:44 PM