So I'm working on answering these questions for my interview with Wellesley Magazine (look for it in the next issue, I guess? I don't actually know when it's going to run) when I suddenly remembered this comic strip I drew, back in March of 1998. 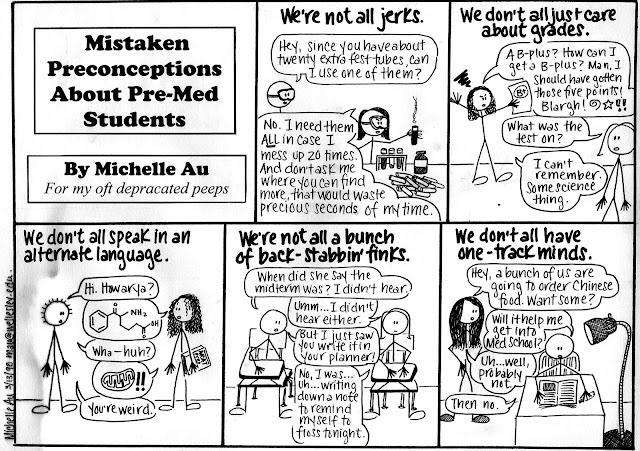 I apologize for the state of the image, but I just scanned it from the original, and the original, sadly, was water damaged many years ago from some flooding that we had in our apartment.  It's still basically legible though, and reading through this, and other comics from my tenure as the cartoonist at The Wellesley News (a position I held for three years, mainly because no one else wanted to do it), I was surprised to see that many of them held up pretty well.  I mean, some of them are very Wellesley-specific--some of the references I don't even get anymore, and I wrote them--but many, many of them could be comics about college life in general.

So!  Here's what we're going to do.  I'm going to scan some of the old comics.  And I will post them up here sequentially.  And you can read them.  You'll have to remember though, that I drew these a long time ago.  In March of 1998, when I drew this particular comic about pre-meds, I was nineteen years old.  Some of the comics are also a victim of their times, as my unfortunate and un-ironic use of the word "peeps" probably shows.  But they can be taken for what they are, which is vintage snapshots of me, doing what I still do today, in embryonic form.

I was much more prolific with my cartooning then--I had to do one new comic a week every week for the school year, and some of them were, admittedly, a little rushed.  But I never skipped a week, I never ran a repeat, and I never missed a deadline, even when I had pneumonia and the shingles back-to-back the winter of of my senior year.  That's an ISTJ for you.  (Sorry for referencing that personality test thing again, but really, if you ever wanted to know anything about me, read that link, it has me nailed down to a tee.)  By the way, in addition to this weekly comic strip, and I also had a weekly humor column in The Wellesley News--a form and style of writing which eventually begat this very blog, and then the book.  So thank you Wellesley, for getting me started.

Anyway, look here in the upcoming days for more comics from my old college strip, and try not laugh at me too much.  Or, laugh, but because you think the comics are funny, not because, I don't know, the idea of college me sitting alone in her room drawing comic strip after comic strip is just too dorky to tolerate.  Fish gotta swim, birds gotta fly!  And if you're still in Boston or thereabouts, maybe I'll see you May 16th, during my reading at The Coop.  Afterwards, we can wear our pajamas to the dining hall, make nachos in the microwave, and then talk about feelings.
Posted by Michelle Au at 2:18 PM