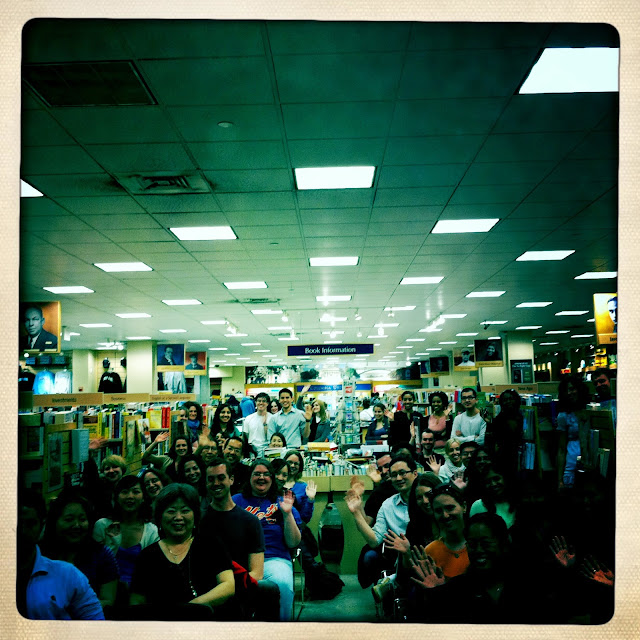 The event was awesome.  I was a little concerned about attendance beforehand, because it was a Wednesday, and a little early for some people getting off work, maybe a little late for others.  But the turnout was fantastic, we pretty much sold out all the books in stock, and the discussion afterwards was really good.  Thanks for coming out, New York!
(Philly, are we going to be having some fun too?  Come on then!  I'm a little anxious about Philly because it's the city that I begged to have added to the tour but also the only city where I've never actually lived or gone to school.  But Philly is such a great medical town and so close by that I just couldn't image passing up the opportunity to meet some of you in person.  So...see you tomorrow?  And bring your friends!  All 500 of them!)
Before the book event I swung up to Washington Heights to visit with some folks and visit the med school.  You know what?  It's exactly the same.  Kind of grim, kind of imposing, with a lot of people in white coats walking around.  Feels like I never left. 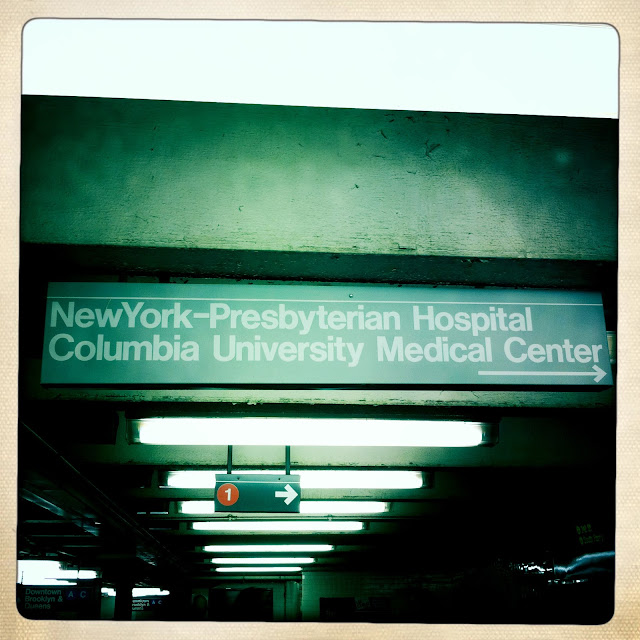 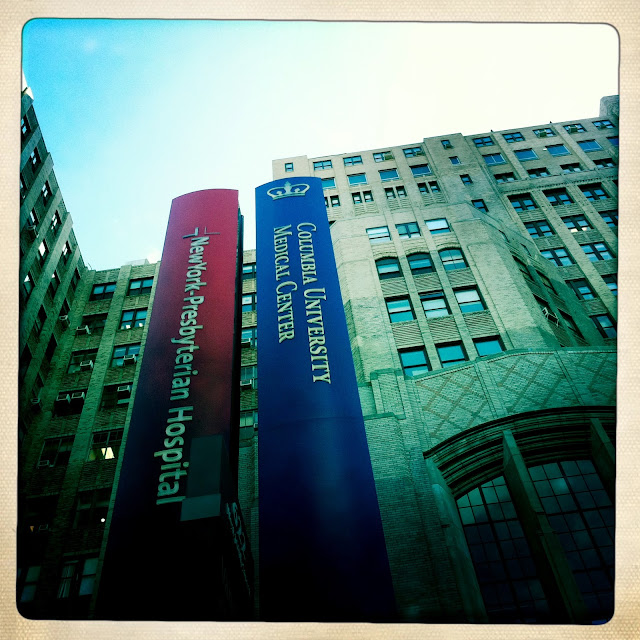 I would have taken more pictures but there were so many people walking around that I probably would have gotten plowed down if I tried.  Luckily, some assiduous readers helped me out with this one: 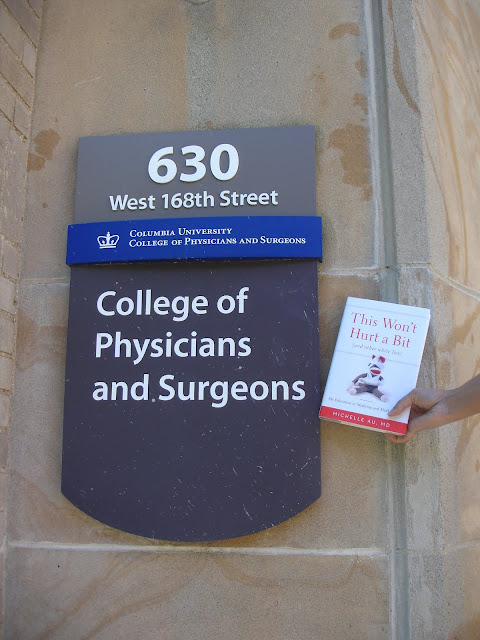 Anyway, I'll be heading to Philly tomorrow, where I'll be spending some time with my old friend Tammy, who has the distinction of being the person who convinced me to switch from Peds to Anesthesia in the first place.  We're going to the famed Mutter Museum (of Medical Marvels?) before the book event that evening, and if you don't think I will live-Tweet that shit, then obviously you don't know me at all.

Finally, a few more pictures of the book out in the wild.  Thanks to everyone for sending them in, I can't fit them all in this entry, but I picked a handful that were fun.

In honor of the first scene in the book, which some of the morning radio interviewers from today laughingly said they deliberately avoided talking about in great depth (heh) in case some of their listeners were still eating breakfast.  Thanks, Sangeetha! 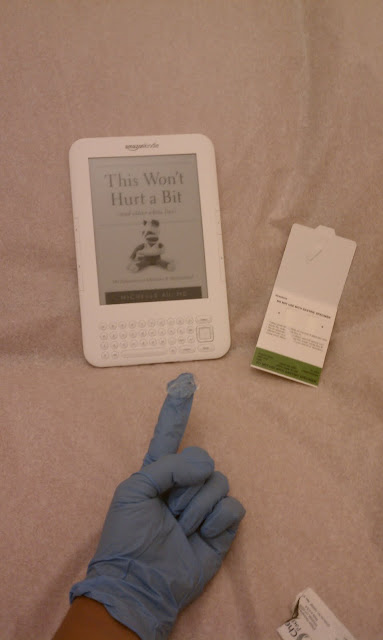 Here we are, atop the CN building in Toronto, which is apparently the tallest building in the Western Hemisphere.  Lofty!  By the way, reminds me of this: On Old Olympus's Tower Tops, A Finn and German Vied At Hopps.  Quick, what is this mnemonic for?  And why do I still remember it?  Ah, the sticky and sometimes random power of memory.  (To be clear, yes, I do still kind of need to know this, and the mnemonic helps.) 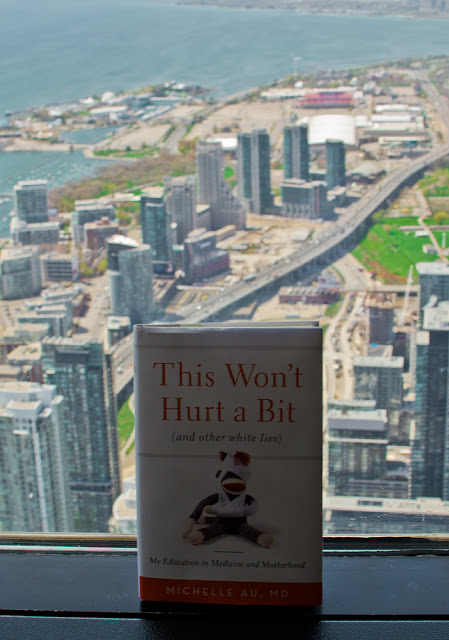 Monkey see one, monkey do one.  Now we just need a shot of the monkey teaching some other monkey how to suture banans.  IT'S THE CIRCLE OF LIFE. 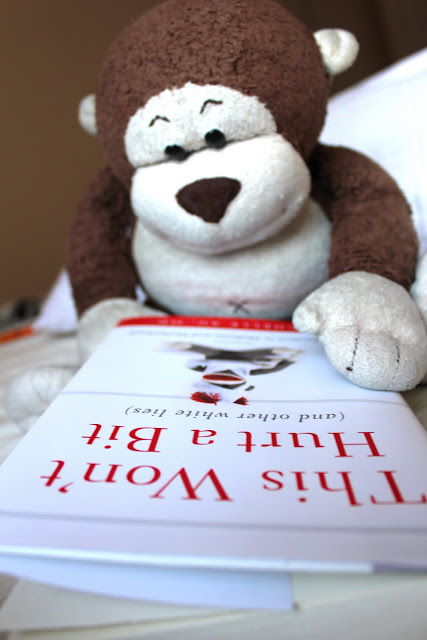 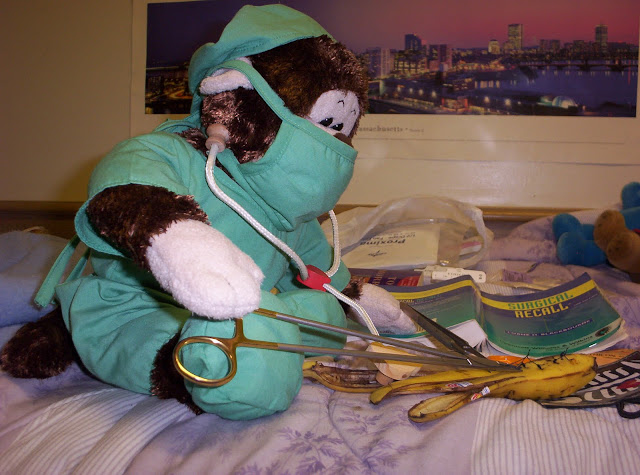 Finally, this last one (thanks Mingle!) is for Cal and Mack, who both LOVE "Angry Birds," which Cal can play with some skill, although Mack mainly just slingshots most of his birds backwards or straight into the ground. Which is a good segue to point out that the book is available in all e-book formats now!  Instant gratification, ho! 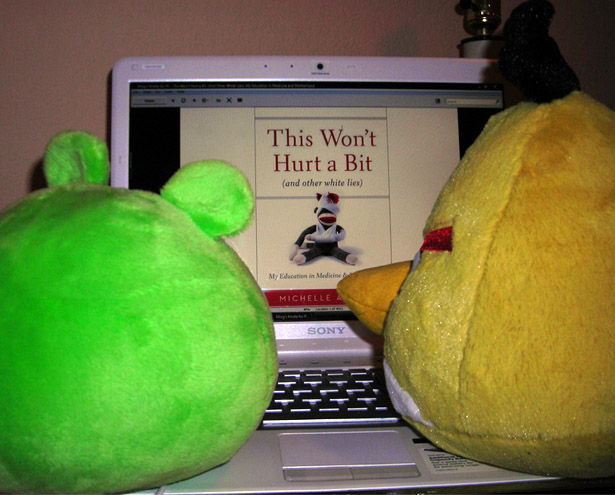 Thanks, everyone.  See you tomorrow in Philly, and then on Monday in Cambridge.  Surely there will be some sort of yard nearby in which to park your car.
Posted by Michelle Au at 3:26 PM