Hey everyone.  I meant to update sooner, but you know, NEW BABY.  Always needing stuff, they are. 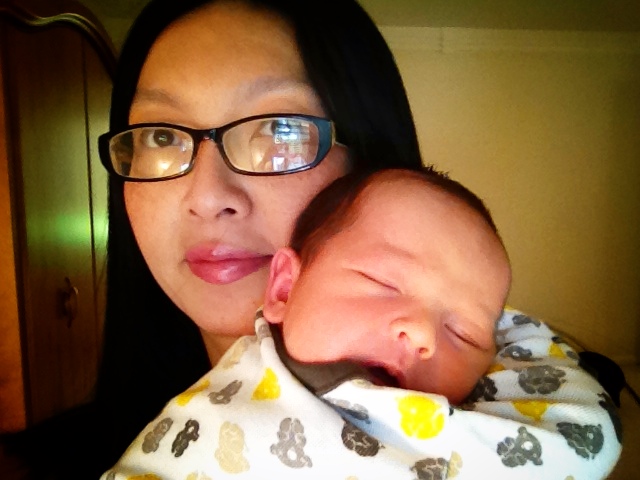 Nina's been doing really well.  I was afraid, after having two pretty easy babies with Cal and Mack, that we were going to strike out with Thing 3 and be granted some kind of hellion.  But Nina's much like her brothers were, in that she's a good, sweet baby who is easy to please and whose cuteness makes up for the rest.

I do think that some of it is due to her innate good nature, but I also think that our easy time of things is framed by expectation.  With a new baby, people mostly complain about the lack of sleep, and the constant neediness of the newborn--so much feeding! so much holding and rocking! where one diaper change ends, the next one begins!  And so forth.  The thing is--that's what babies are supposed to do.  And what I'm doing on my end--holding her basically all the time when she's awake, feeding her on demand, changing many many teeny little poo diapers and scanning her pee diapers with almost clinical intensity to assess her degree of urobilinogen excretion (though now, linking to Wikipedia, I am realizing for the first time that urobilinogen is colorless--all that wasted observation!)--that's what I'm supposed to do.  So I don't really think I'm having an appreciably easier or harder time than anyone else with a new baby, we're just all doing what we're supposed to be doing, and everybody's happy.

Hey, wanna see some pictures?  Most of these are on my Tumblr already, but I know not everyone is my buddy on the twitters et al.  It's fine, little technophobe, we'll just churn some butter and make some corn husk dolls right here by the flickering light of this here computer screen. 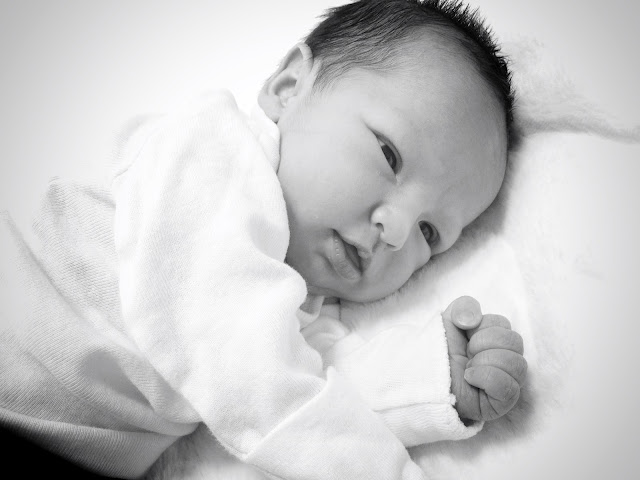 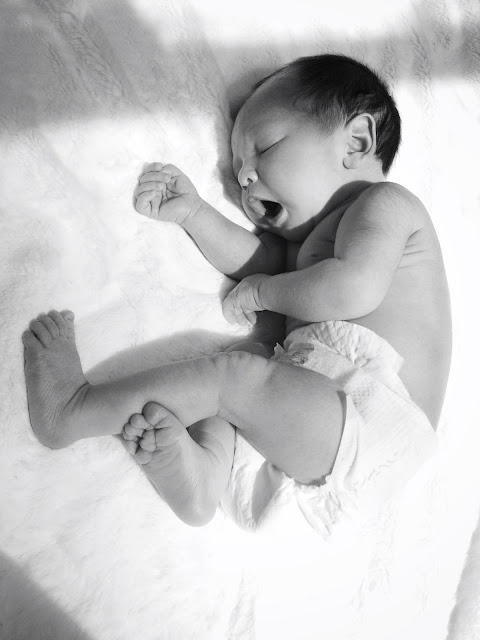 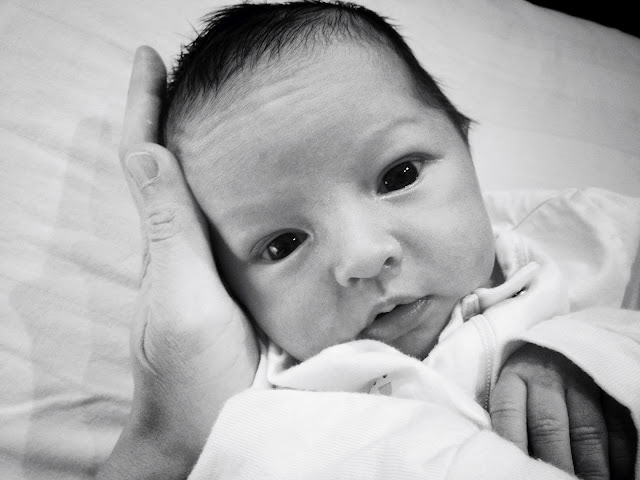 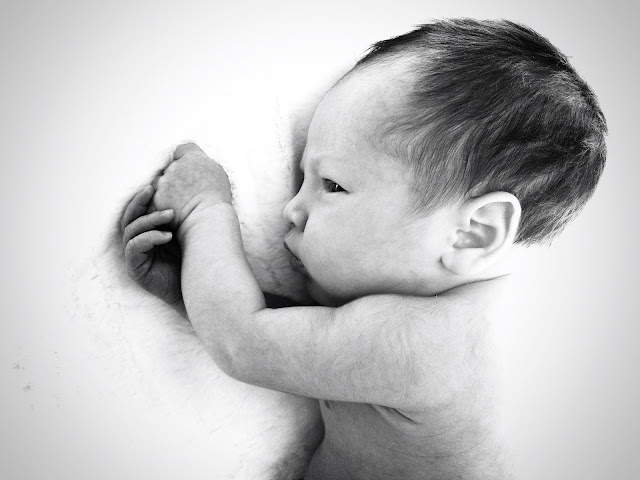 I knew that Cal would do well with a new baby (little old man that he is, I knew he would relish the expertise conferred by being not only seven years her senior but also a veteran older sibling) but I'll admit that I was a little concerned that Mack, who has spent the last three and a half years marinating in his baby-of-the-family status, would be jealous.  And I'm not saying that he's not ever going to be jealous or competitive (just wait until she starts getting mobile and his slavishly guarded collection of superhero action figures comes under siege) but so far, he is in love with his baby.

"Baby Nina is so pretty."

"Can I rub her and smell her?"  (He means rub her head.  We talked about the fontanelles and the importance of using his flat palm instead of poking her brain with his fingers, but then Cal was like, "She has a HOLE in her HEAD?" and then we had to kind of soft-pedal the anatomy lesson lest everyone freak out.  Mack also particularly likes smelling the baby.  I understand the appeal of smelling a new baby and much as the next weirdo, but the way Mack goes after her, you'd think she's one of those really fascinating second generation scratch 'n' sniff stickers that really really for real OMG smell like food.  Like the buttered popcorn one.  Or that one that smelled like pepperoni pizza that I was fascinated with as a child because wow, they made a sticker smell like pizza?  THE FUTURE IS HERE.) 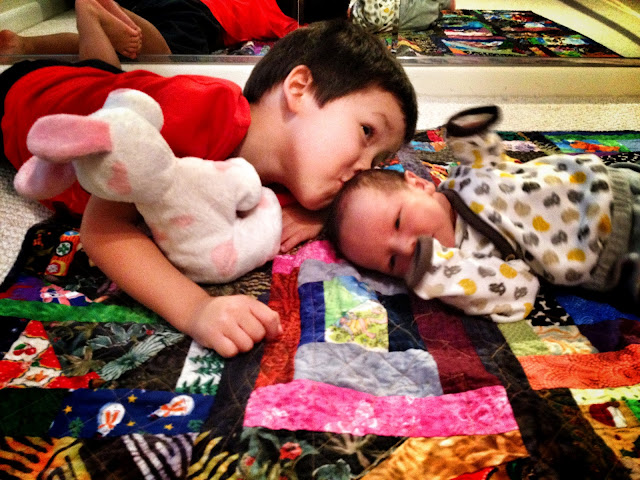 Anyway, sibling rivalry averted for now.  Cal and Mack seem to have reserved all their petty animus for each other ("MOM! Cal looked at me!") but Nina, so far as they're concerned, is a princess.

I'd meant to post this up earlier today (because I'm pretty sure no one's going to read this now when I'm posting it, almost 11:00pm on a Friday night), but see above: baby, comma, care of.  There are a couple of other posts that I'm working on in my head to post hopefully in the next week or two when I have a free moment, including but not limited to:


Any other post topics you guys interested in hearing about while I'm on maternity leave and have some time for such extracurricular pursuits?  Aside from wanting to see more pictures of Cooper to prove that she didn't die a year ago and I just somehow never mentioned it here?  I'm working on that post too--I'll get her to hold a copy of today's Wall Street Journal in the pictures, you know, as a proof of life.  (Not to joke about our dog dying or anything--obviously we care deeply about our dog.  But we're just no longer in the phase of life where we treat her as a child by proxy.  Rest assured that she is well loved and taken care of and just got a new memory foam dog bed that she is very pleased with.) 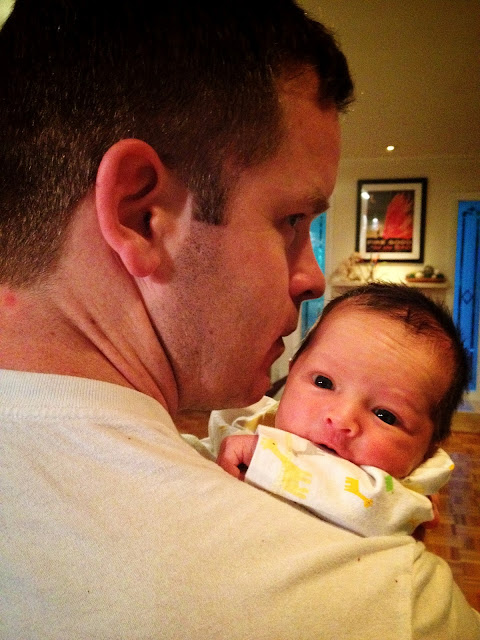 Anyway.  Have a good weekend, everyone.
Posted by Michelle Au at 10:48 PM