I had Cal three weeks after starting my training in anesthesia--a highly conspicuous move that I think indelibly branded me for the rest of my academic career as "that pregnant resident"--so I think it's fair to say that I have some insight into the assumptions that people tend to make about people mixing family with a career in medicine.

In most ways I imagine it's not unlike mixing family with any intense or high-powered careers--look at all talk that Marissa Mayer's pregnancy incited after she was named the new CEO of Yahoo. (Aside: I'm not saying that my career is anywhere near as high-powered as that of Marissa Mayer, just that the case is emblematic). Particularly in the field of anesthesia, where I'm in the room but often lurking in the background or behind a drape, I've heard a lot of conversations about medicine, other physicians, and things that fall in the rubric of "lifestyle choices"--conversations that maybe weren't meant for me to hear.  But as a result, and as a result of living my own life, I can say for sure that women in medicine (physicians in particular) who choose to have children during the most active parts of their careers suffer under what I'd describe as a handicap of perception.

Perception. Not an actual handicap, but one of perception. There's a Chinese saying that my dad always uses that roughly translates to, "When you're walking through someone else's pumpkin patch, don't bend over to tie your shoes." (OK, that's a very rough translation--I don't think the parable from which the saying was taken originated during a time when shoelaces were a particularly popular feature of Chinese footwear.) What it means is: if you're in a setting that breeds suspicion, try hard not to do suspicious-looking things, no matter how innocent they actually may be. Because you may be just tying your shoes in the middle of that pumpkin field, but a casual observer might be inclined to think you're actually stealing those pumpkins.

I think that in medicine (and perhaps in the working world in general but what the hell do I know, I've never had a real job doing anything else) people are quick to assume things about working mothers, not too many of them flattering. I'd like to say "working parents" because believe me, I'd love for us to get to a point where there is actual gender parity on the issue (to be fair, I do think that Joe and I do have gender parity when it comes to parenting, but...we do have to leave our household occasionally and interface with the world) in the year 2012, this is still more of an issue of perception for working mothers. The following is a list of some of the things that some people are quick to assume about women with children who work outside of the home.

2.) We complain when we do have to work as hard as everyone else.

3.) We want special favors and allowances in the workplace because having kids somehow entitles us to them.

4.) We are unreliable because something's going to come up with our kids and we're either going to leave our co-workers with the extra work, or sometimes leave our jobs entirely.

5.) We just don't care as much about our jobs as our counterparts.

5.) All this is somehow inevitable.


The problem with other people's perception, especially those colored by preconceived notions, is that there's very little that you can do about it.  It has very little to do with you, and sometimes even very little to do with reality itself.  And that perception can be insidious, like a Chinese finger trap--the harder you struggle against it, the tighter it binds you.  (Yes, again with the Chinese.  WE HAVE A RICH CULTURAL HISTORY, OK?  Actually I have no idea whether Chinese finger traps are actually Chinese, or just "Chinese," like fortune cookies or General Tso's chicken, but whatever, it's not germane to the metaphor.) You want for all the world to defy the lowered professional expectations that people have of you, to prove them wrong, but sometimes it feels that the harder you try, the more you're reinforcing them nonetheless.

So what I think a lot of female physicians with kids do--and what I know I certainly do--is overcompensate. You do it all and then some. You work even harder. You try to never complain about your schedule or your hours while you're at work. Not only do you not ask for special favors, you embrace situations that allow you to prove that fact. In other words, you try to work as much and as hard as everyone else, and then you go a little bit farther, just to make sure. You try to be above reproach.

Sometimes this works. Sometimes it doesn't. 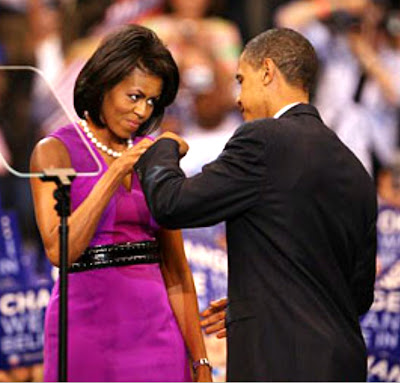 I think often now about Michelle Obama, particularly during the president's first presidential campaign, and how hard she and her team had to work to control her image.  The reasons people might have a negative impression of her are perhaps multifactorial and not entirely flattering of a portion of the electorate, but there seemed a point where every little thing she did or said, no matter how innocent, was misconstrued as playing right into her detractors' expectations.  (The endearing but now notorious fist-bump comes to mind.)  Sometimes it feels that way to me too.  Representing not only myself, but working mothers in medicine as a group, I am very aware of trying to present myself, present all of us, in the best possible light.  Again, overcompensating.  I think this explains a lot of my personality at work, which I have often classified as "aggressively pleasant."  As in: I will be easy-going and pleasant to work with if it kills me.

Sometimes this gets pretty tiring.

I also will note that there's a segment of people who will respond to this blog entry with the opinion that I and others like me are far too sensitive about these issues, reading meaning into things that have no meaning, turning mountains into molehills.  I am perfectly fine with people responding however they want (as someone who has been writing online for more than a decade, I think that if it's your right to publish something online it's the right of your readers to respond, even if they disagree with you) but I also think that actually being a working parent in medicine, a working mother in particular, lends you a perspective that you don't have access to otherwise.  So saying that we're overly sensitive to the issue of low expectation or perception bias is, to me, a little like a straight person saying to a gay person that they're being too sensitive about homophobia, or a white person saying to a Latino that they're too sensitive about racism.  Or, maybe, like Mitt Romney condescendingly telling poor people that they just don't work hard enough.  If you don't know what you're talking about, sometimes it's best not to talk.

I would love to hear your own stories about whether or not you feel that working parents in medicine are stymied by lowered expectations or perception bias, and what you all do in your lives to roll with the punches.  Because though the natural (or perhaps easiest) reaction is, "Screw 'em! Who cares what people think?" (this is Joe's response, for example) the fact of it is--I do care.  I care what people think of me in my career.  I care not only about being a good doctor, I care about being perceived as a good doctor.  I care not only about having a good work ethic, but about having that work ethic be a key part of how people see me. I care.  Maybe not as much as when I was in training (when I wouldn't even have dared to write a blog entry like this at all, for fear that I'd be seen as "whining") but I still care a lot.  So until I stop caring, or society changes as I continue to hope it will, I guess I'll keep walking through this field, head up, eyes straight ahead, and try not to look like I'm stealing pumpkins.
Posted by Michelle Au at 1:56 PM