Well howdy. Explaining why this blog hasn't been updated is only slightly more boring than reading the blog itself, but in short I had to give Grand Rounds last week, and since I couldn't work on Grand Rounds at work or while my kids were awake, basically every free minute I had up until last Wednesday was channelled into that presentation. Thankfully, it's finished! Now to resume my life of indolent goofery!

You may also be disappointed to know that I ultimately decided against using the "Exorcist" slide in the talk (Factor 1: too early in the morning, Factor 2: Catholic hospital) but it may please you equally or maybe even more that I did use this slide as an opener: 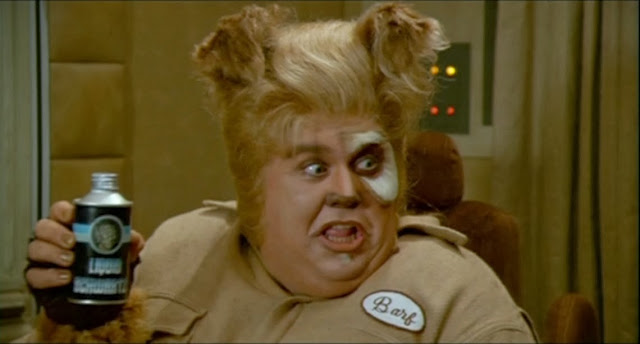 (He's his own best friend.)


As a brief and unsatisfying epilogue to the fractured (ho) story of Cal's clavicle, these following addenda:

Right before Thanksgiving, I reached out to the principal again, asking him if he could give me an update on his conversation with the school nurse after the incident. Given my background (and recall that I trained for two years as a pediatrics resident prior to anesthesia) I also offered to sit down with the nurse and work with her on a standardized medical policy for parent notification--if, of course, they wanted my help.

He responded...well, let me just copy and paste the body of his response email in its entirety.


"Thank you for contacting me regarding your concerns. Yes, I have communicated with the school nurse and the district supervisory nurse regarding the incident. Additionally, we have discussed and developed a plan for proper notification to parents."

Note, no actual elaboration of what this "plan" is, nor any perspective from this nurse herself. So...basically a deflecting non-answer, right?

Also (and I probably should have noted this in the previous entry so as to not seem quite as much like we are raising a doormat) the day of the injury, after he got home but before we went to the ER, Cal and I had a little talk about self-advocacy and appropriate responses. And I basically told him that grown-ups aren't always right. He had just finished reading "Matilda" a few months ago, so I referred to that a few times, how Matilda was oftentimes smarter than her parents and how Matilda's headmistress (The Trunchbull! The chokey! Oh man, I really love that book) was usually wrong. And that while he should obviously always be respectful of adults, if he felt strongly that something was amiss and that the adults taking care of him weren't taking it seriously, he should request to call his parents regardless. Then I quizzed him on our cell phone numbers. Then I crammed more Tylenol in his craw and tried to figure out his NPO status.

Anyway, all's well that ends...if not well, then at least eventually.


Well, now we're all caught up, but now I realize that I didn't actually tee up anything fresh to talk about today. But instead of pushing save and kicking this half an entry down the road like a tin can, I'm just going to slap it up with a promise that I will put up a real entry soon too. I do, in particular, want to write a little something about Nina, in particularly about her Girlness and Christmas shopping for her, and this strange feminist guilt I have about getting her real girly things. And then the strange feminist guilt I have about considering dolls and their accoutrement "girl things" because boys can play with dolls too, patriarchy! Though I wish that I could find that same stroller that Cal had when he was Nina's age, because damned if they don't just make everything in pink now. 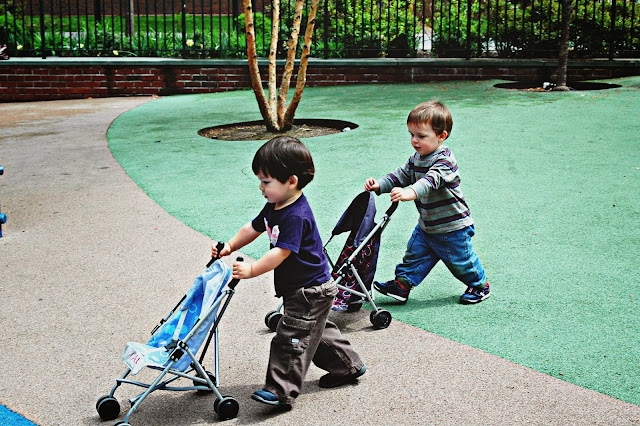 (Above: Cal and some rando kid, circa 2006. This was back when we lived in Manhattan of course, so while such playground spaces and pocket parks came at a premium I would just like to point out how much more I prefer this kind of rubberized flooring to the default "mulch and wood chips" surfacing that seems to be the standard playground-issue here in Atlanta. It pushes up your minimum age to enjoy the playground by at least 6 months, between waiting for your kids to walk well enough and making sure that they're not going to eat all the wood chips when they do fall. Though high-fiber gluten-free diets do seem to be quite popular these days, don't they?)