You may have noticed (though certainly the misguided companies that e-mail me soliciting product endorsements have not) that I do not run ads on this site. Never have. Sometimes I have used a free service that ran sidebar ads as part of their own business plan (Haloscan comes to mind--I used their service to run my comments section until that company imploded) but overall, I have never accepted money in exchange for ads or endorsements of any kinds. The only kind of endorsements I give--see the last blog entry, for instance--are ones that I do for free, in the spirit of a friend recommending something to a friend.

I know a lot of blogs--in fact, the majority of blogs--run some kind of ads to support themselves, and that is all good and fair. The reason I have chosen not to is multifactorial. First, this is a personal blog which happens to be written by a doctor. Corporate sponsorship is not necessary, nor would it necessarily be appropriate. Secondly, I need to keep things simple, as I have a hard enough time updating this blog as it is without thinking of peripherals like ad content and sidebars. Third, I have a job that pays the bills, and it's not worth it to me to run clutter-y, annoying ads in order to make whatever pittance in ad revenue I could generate.

So please just treat the following is a public service for pen nerds everywhere.

First up, the Pilot Hi-Tec-C Coleto 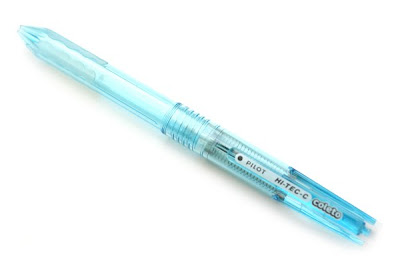 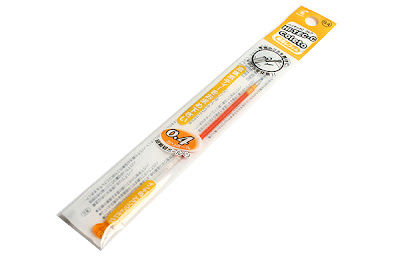 Jet Pens very kindly sent a pen barrel along with three 0.4mm ink cartridges in the standard red, black and blue, though certainly for those more adventurous of us there are many more colors available. (For instance, a choice between "Orange" and "Apricot Orange." It's the subtle differences.) The pen is easy to use and very standard as multi-barrel pens go--just jam the ink cartridges in, press down what color you want to use, and start diagramming that Krebs cycle, you multicolor pen nerd, you. I had bought a few of the regular Pilot Hi-Tec-Cs to use before, and I did like the pen, although the pen tip was a little scratchy for me (my own fault, 0.4mm is a very fine tip) and the fact that it was a pen with an actual cap rather than a retractable pen drove me crazy.

People seem to rave about the Hi-Tec-C Coleto, as it gets past two of the commonly voiced displeasures about the regular Hi-Tec-C, in that 1.) it's retractable, and 2.) as multi-cartridge pen, the pen barrel itself is thicker and therefore easier to grip. However, two problems with the Coleto that I noticed were that there seemed to be a lot of "wiggle" of the cartridge within the barrel of the pen, to the point that it kind of affected my handwriting. To be fair, it's a very thin cartridge with a needle tip nib, and I do tend to push hard when I write, so perhaps it's operator dependent. However, with my personal writing style, I think I would find it too scratchy and too delicate for heavy use.

Next up, the Sarasa Zebra Clip Gel Ink Pen in Blue-Black with an 0.4mm tip 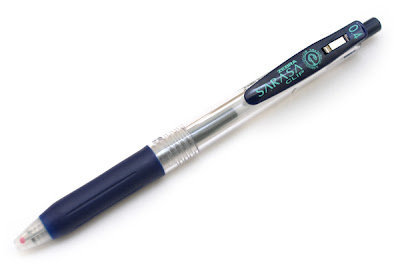 I'd eyed this pen before, because unlike many of the rarer Japanese or Korean imports (which makes it sound like we're talking about rare anime reel-to-reels or something, but no, WE'RE STILL TALKING ABOUT PENS) this pen is actually available at Staples. My source at Jet Pens also tells me that the clip (it is spring-loaded, which makes it open and close wider than the standard pen clip) has made it popular among nurses. I also liked this pen because it's retractable (cannot emphasize the importance of this feature--I refuse to use a pen at work if it is not retractable) and it has a nice rubber grip which makes it comfortable to hold.

It's a fine pen. It writes smoothly, the gel is nice and non-blobby, it looks like it has a decent ink supply, and didn't skip even after a couple of test drops from a respectable height. (The skipping gel pen is a major pet peeve. I drop my pens a lot, due to, you know, the Earth's gravity; and I cannot tell you how many 0.5mm Pilot G2s I've had in my life that just stopped working despite a full ink cartridge because I dropped them once or twice. HATE.) However, it's nothing special. And at two bucks each, they're fifty cents more than the Uni-ball Signo RT UM-138, which is a gorgeous fine tipped pen, with many of the same properties and (I think) a more handsome design. True, no springy clip, but I have not yet evidenced need for a springy-clip pen in my life to this point, so for my money, I'll stick with the Uni-balls. 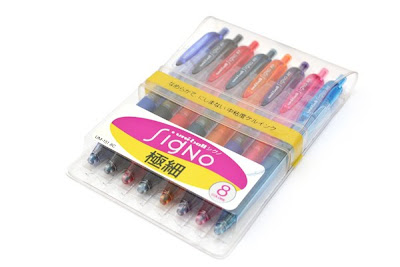 (Also impressive about the RT-138s is that one time I had an anesthesia record that I got pretty wet--got sprayed with saline or something. The ink barely smeared. I have rubbed my writing with a latex glove bare seconds after laying down the line, and nary a smudge. That's a good hospital pen, friends.) 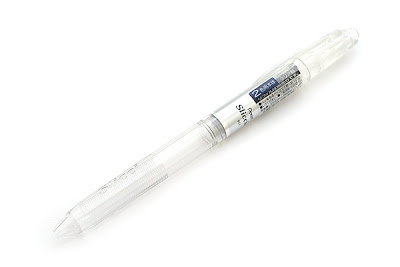 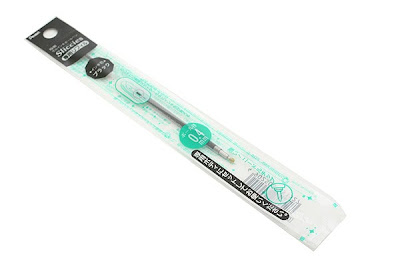 Again, a multi-pen with 0.4mm tip, only the Pentel multi holds two cartridges, not three. The barrel is clear plastic, nothing fancy that you'd use to sign the Declaration of Independence or anything, but cheap enough that you wouldn't cry if you lost it. Easy to use, a large range of colors (in the blue spectrum we have blue, blue black, sky blue, and milk blue...yes, I said milk blue). One benefit of the Sliccies over the Hi-Tec-C is that the ink supply seems a little wetter somehow, which I like--makes the pen glide over the paper easier. However, again, the ink cartridge is small (probably a commonality among most multi-pens, just for mechanical reasons) so I'd be worried about running out of ink constantly. I guess I'm just not a multi-pen kind of person.

Oh, and unrelated to Jet Pens, I got a few of these guys yesterday: 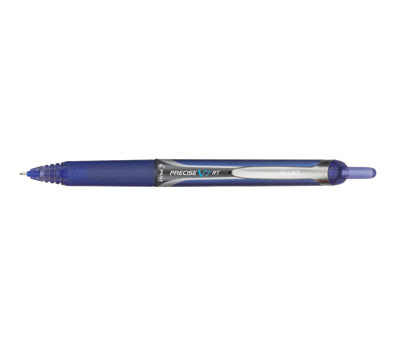 (It's the Pilot Precise V7 RT, in case you don't have your bifocals on.)

I usually don't like writing in a 0.7mm tip, because I prefer a more precise line and anything too thick tends to blob up on me. But I had to write a letter to someone and I knew that if I used my standard 0.38mm pen (I have them in both the Uni-ball Signo RT UM-138 as well as the Pilot G2s, which you can find in 0.38mm at your regular big box office supply store if you look hard enough) then my writing would be too small. The Pilot Precise V7 RT really fit the bill. It's a fatter, wetter line, but great for scrawling larger notes, and makes signing your name feel awesome. The one caveat with this pen is that it does tend to smudge and bleed quite a bit on the wrong kind of paper, or if your writing gets wet, so perhaps more for your correspondence than for writing in the hospital.

I should get a show on NPR where I just talk about pens. And then I could squawk at my co-host in an abrasive Boston accent and make corny Dad-jokes. Oh wait, that's "Car Talk." Still, if anyone has a programming slot on their local public radio station, call me. As demonstrated, I can talk about pens for a long time.

(Idle aside: my dream--and I think it's a stretch, though not impossible--is to be invited to be a guest on "Jordan, Jesse, Go!" Yes, now you know that my self-professed life's goal is to be featured as a one-time guest on a marginally well-known niche comedy podcast. I REACH FOR THE STARS.)
Posted by Michelle Au at 3:29 PM