Well all that medical talk was fun, but now let's get to why you guys really come here: for the pictures of me exposing myself. Spring Break!  Woo!  (Pulls up shirt.) 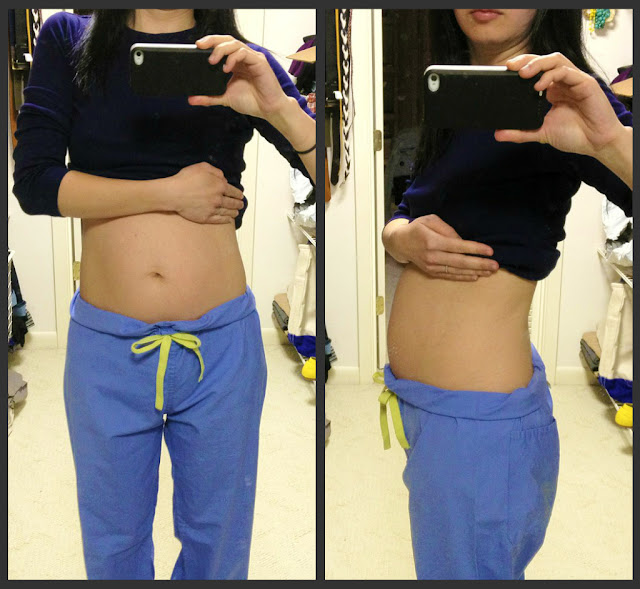 Thar she blows. (That fine dusting of white over my lower abdomen on the profile shot looks, I know, like a weird rash--but I think it's just speckling on the mirror from Mack blowing raspberries at his own reflection.  Learning to love yourself is the greatest love of all, my son.) 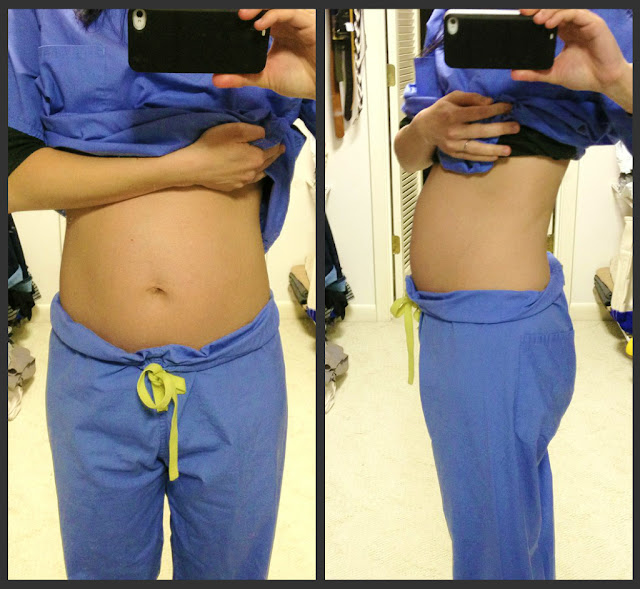 You know, I kind of regret starting this week-by-week pregnancy photo montage thing, because it's kind of boring, but I feel obligated to just keep it going because...inertia!  THAT'S HOW WE ROLL AROUND HERE. Anyway, compare it to the picture from 7 weeks ago and you'll see progress, kind of.  Thing 3 is measuring right on the money for dates at any rate, so that's good.

I remember when I was pregnant with Cal, around this point of gestation I was doing a rotation in the NICU.  We had a couple of micro-preemies in the unit at that time (babies that were born around 24 weeks gestation--we actually had one that was even a little shy of that, which brought up some very difficult ethical issues when the parents demanded the full court press) and it was particularly jarring to say the least at that time to see those babies in incubators and know that it was the exact same size and age as the fetus bouncing around inside me.  Anyway, if tradition holds there probably won't be anything terribly dramatic to look at externally until around, oh, say, 25 weeks or so (huh, looking at those old pictures reminds me how we never used to clean our bathroom mirrors, ever--and this was before we had messy kids to blame stuff on) but we'll just continue this little project in the spirit of following through with things I've started.

This is going to be really embarrassing at the end when I do the end-of-pregnancy picture roundup and it becomes glaringly evident that I wear scrubs, like, 85% of the time.  I mean, that's an accurate representation of my wardrobe and everything, but holy hell woman, it's like I'm a cartoon character.  Remember when Charlie Brown opened up his closet and it was just a whole row of those yellow T-shirts with the black zig-zag stripe?  That's me.
Posted by Michelle Au at 1:03 PM