I've enjoyed seeing everyone's back to school photos of social media these past few weeks, though they make me realize that I must be either one click off age-wise or else totally disconnected from current parenting trends, as I have never in my life taken a picture of my kid holding a sign (or if you want to get real fancy, a blackboard) broadcasting what grade they were going into. (Another trend that either came later or else that I just totally ignored was that thing where you put a giant sticker on the front of your kids' onesie telling everyone how many months old they are.) I mean, not that I don't take a picture of my kids on approximately the first day of school, because I do...kind of. But it just seems like there are so many things and rituals and accoutrement now. Like the child-rearing industry is slowly becoming the bridal industry.

But speaking of back to school... 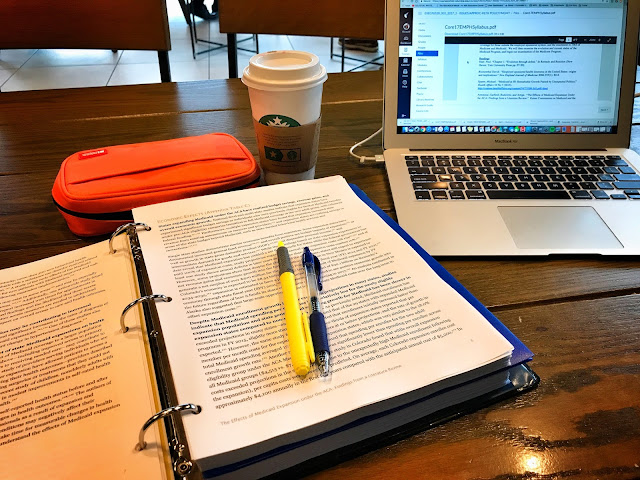 Around the end of last year (right around, oh, say...Wednesday November 9th), I started thinking about how I could get more involved in healthcare on a broader level. I love my job and have no plans to stop being an anesthesiologist, but I also wanted to do something...else. Something more. Something less zoomed in, something a little more macro, something more policy and population-based. A broader way to help out. So what I decided to do was to go back to school and get a Masters of Public Health.

This was not an easy decision. Getting this degree is going to take a lot of time. It comes with a not-inconsequential monetary cost. I don't "need" to do it, and in most ways it's going to make my life a lot harder. It's not linked to any particular path for upward mobility or higher earning power, and I'm not looking to switch jobs. Almost no one that I'm close to understands why I want to do this, or thinks its remotely a good idea. (My parents seemed initially excited at the news, but then rapidly realized that I said I was getting an MPH, not an MBA, as they misheard. They were much less excited after that.) Oh, and also, I don't really have a really good specific idea of what exactly I want to do with this degree when (or if) I finally complete it. If I'm going to be totally honest, the only real reason I want to go back to school is because I want to learn more about public health, and can only hope that in the process of going through the coursework I'm going to find a useful, real-life way to marry this knowledge with my current career and find a good, real-world application for it. But I don't know what that's going to look like yet.

So anyway, that's happening. I've been accepted to the Mailman School of Public Health at Columbia, and will be starting their part-time executive MPH program next week. "Part-time" means I still will working my normal job, exactly the same as before. It also means a lot of remote work and an online curriculum, though once a month, for one long weekend (Thursday through Sunday, all day long), I will be flying into New York and completing my in-person classroom requirement. This, every month, for two years. We had an on-campus orientation in August. The first official day of classes is next week on September 14th. If I can get through this all without losing my mind, I'll be slated to graduate in August of 2019.

The time investment. The time investment is...a lot. I take it seriously. I work part-time at the hospital, but I have three kids (which is why I went part-time in the first place), and kids don't just go on auto-pilot. Doing this program necessarily translates into less time for me for them. It means more time in the evening spent in front of books, more than twice as many weekends I will be out of the picture, less flexibility for everyone all around. This was Joe's main objection to me starting this program. I don't think I'm airing any dirty laundry by talking about this, because he'd tell you just as easily: he doesn't think this is such a great idea. He's nominally supportive, and by that I guess I just mean he would never tell me explicitly not to do it. But for our family, I know he'd really rather I just...didn't. He doesn't see why we spent so many years getting to a point where our life was finally getting easier only to deliberately make it harder again.

But that was my exact thinking, only in reverse. We have three kids. Our youngest, Nina, just started kindergarten this year. I'm not saying our kids still aren't youngish (they are), or that they don't need me as much (they do, though the ways in which they need me are less about immediate survival and more about presence and guidance and...well, I guess I do all the food shopping and cooking, so, yes, maybe a little bit of survival). But it's a bit easier now. We have some breathing room. We have margins. What do you do with that elasticity? What else do you want to do? What's important to you? Is it about the luxury of empty space, or is it about the luxury to take on more? To do more with your life? What comes next?

Also. I finished residency nine years ago. Nine years into private practice. I love my current job, I love taking care of patients. It's the most rewarding, immediate, and intimate type of service I could ever hope to provide. (I know I'm supposed to say, "outside of parenthood" right here, but I won't. It's not that I don't think parenthood is important, I just feel it's a completely different thing.) But I feel like there's more I want to do. I just don't know how yet, so I want to learn. Because life is not lived in order to be easy. Life is lived to be worthwhile.

And honestly, once I decided to go ahead and do this thing, part of me was really tickled and excited about the idea of going back to school. It's been a long time. And I like school. I like learning. I like knowing things. I especially like knowing things that I feel I should know already. I've been doing some pre-reading for some of my classes, and there are so many things I'm learning now--about healthcare economics, policy, the history of Medicare and Medicaid--that I can't believe I hadn't been explicitly taught before. And the fact that I'll be back at school right where I started, at Columbia, on the health science campus...I just get a kick out of returning "home." (Columbia friends: the School of Public Health is located in the old Psych Institute, next door to the new Psych Institute, two doors down from our first year prison dorm rooms in Bard Hall. That was a grim little block wasn't it?)

So anyway. That's what's new with me. How have you been doing?
Posted by Michelle Au at 4:12 PM