I'm going to be out of town for four days next week (see: yesterday's post), so I signed up to be the "parent reader" for Nina's kindergarten class today. Because of guilt. Oh yeah, also I wanted to promote literacy and volunteer my time and surprise my kid at school. But mainly guilt.

I've done this "parent reader" gig a few times in the past, and I've learned a few things along the way. The first time I did it this, when Cal was in Pre-K, it took a lot more planning and schedule swapping (I was still working full time back then), so it was a higher pressure situation all around. I actually had to get some kind of special dispensation from the teacher to switch slots, since "parent readers" were supposed to come in only for the kids' SUPER DUPER ALL ABOUT ME SUPERSTAR week, and on Cal's original week I was work-scheduled up to the gills. (Cal went to a private school in midtown Atlanta at the time, and as a general rule I've noticed private schools are much less understanding about parents not being able to drop every damn thing and show up midday for stuff on short notice.) But anyway, that first time, the book I brought was...well, I thought it was a good idea. It was one of Cal's favorite books. It was by Dr. Seuss. We had a big hardcover with pictures that everyone could see, even all the way in the back. I loved this book as a kid myself. Right here: 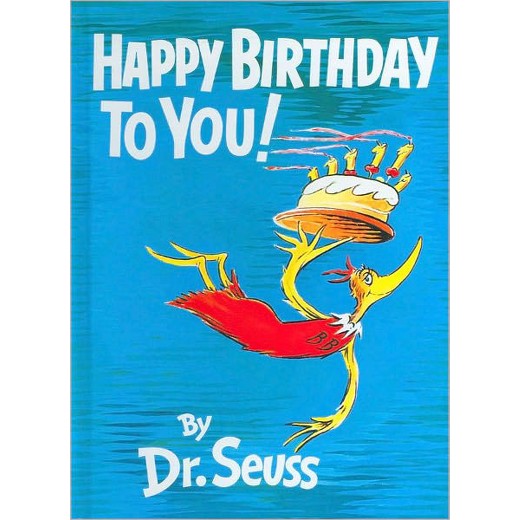 MAJOR ERROR. First of all, the book is 64 pages long. Second of all, it has way too many words. Third, too much lingual dexterity is required, so you can only read it so fast. 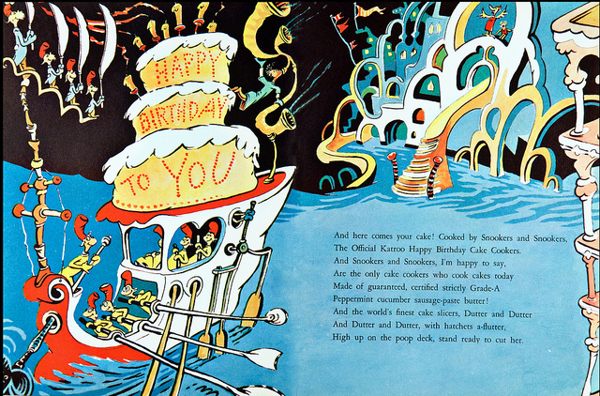 I think by page four of the Happy Birthday book, the kids in the class were flopping around on the floor, running around the back of the room, and generally talking through the whole thing. (Even my own kid was losing interest, and this was HIS BOOK.) I think I skipped a whole chunk of pages in the middle, just to get through it (no one noticed), and at the end, one of the teachers came up to me and said (sympathetically, helpfully), "Yeah, I find that...shorter books are...usually better choices."

I'm not a naturally performative person. I will read to my own kids but I don't naturally have the type of personality that makes me want to read to all kids. I'm not even sure that I like most kids that aren't my own kids. But I can limp through this "parent reader" type of thing OK, because now I know to make better book choices. In sum:

* It doesn't matter if it's "too easy" for your kid. The other kids don't care how sophisticated your child's taste is, and the teacher isn't making judgements on your household or your kids' I.Q. if you end up choosing SPIDER-MAN'S POP-UP LASER TAG ADVENTURE for your parent reader selection, so long as the kids in the class stay out of her hair for ten minutes so she can check her e-mail and finish her sandwich.

* Pick books that are funny, where you can really act out the voices, are almost always successful if you're willing to go there.

* For God's sake, don't read The Giving Tree unless you want to cry in front of a bunch of five-year olds like some kind of psycho. In fact, I try to stay away from melancholia altogether, because I hate feelings. Where the Wild Things Are? Get outta here. The Runaway Bunny? Fuck you.

* Bring a selection, and let the kids choose, but know that there will be split votes and you'll have to end up reading pretty much all of them.


So here are the ones I brought. 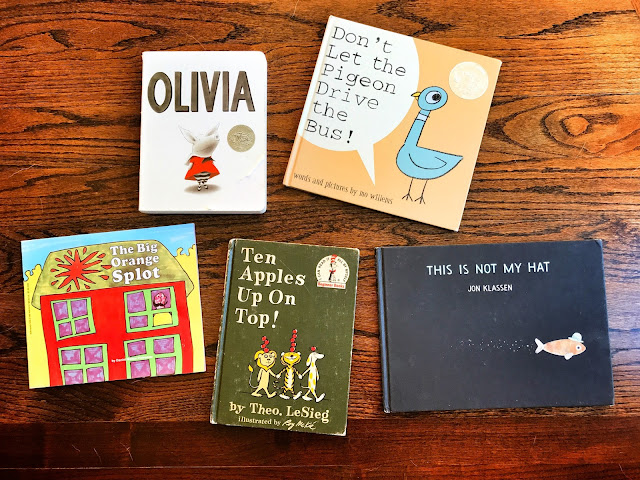 Not pictured: Don't Push the Button (which is kind of a dumb book, but interactive--and yes, I know the book was not written for me, but it's still dumb) and The Monster at the End of This Book, which is actually the perfect book for this kind of thing, but it's only available in teeny tiny board book or Little Golden Book size, and also I can't find our copy. (Those groovy fonts, tho!) 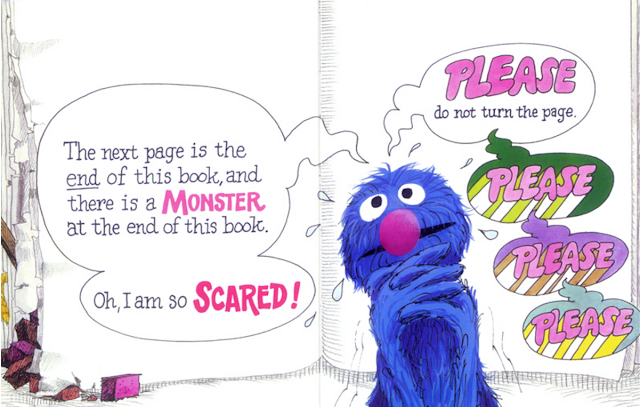 We ended up having time to read three. Don't Push the Button as a warm-up act, This Is Not My Hat as the headliner (I like the art in that one, as well as in John Klassen's other book I Want My Hat Back--first in a three part hat oeuvre, I suppose), and closing with that old evergreen Don't Let The Pigeon Drive the Bus.

"How come you have so many funny books?" this one kid in the front row asked me at the end. Like it was some kind of accident. Kid, you don't even know.
Posted by Michelle Au at 3:02 PM